The Crash Of The Elysium

You may have read recently that I was fortunate enough to win tickets to see The Crash Of The Elysium in Ipswich. Well this past weekend was when I got to go! 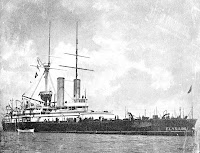 The event itself is in the form of a council-funded local exhibition, taking place in a purpose-built tent not far from the New Wosley Theatre in central Ipswich. 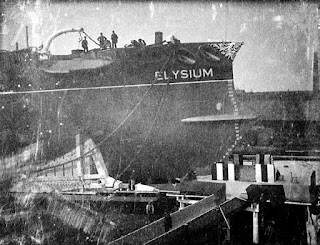 The Elysium was the flagship of the Mayfield Star Line, and was launched in 1888 by the Princess Helena, herself a veteran of over thirty voyages.

The ship had not long been in service when it catastrophically ran aground on rocks on the south coast of England. 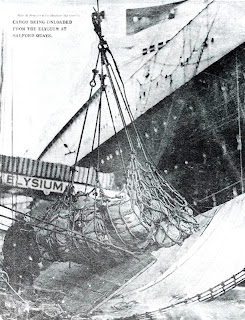 The Elysium was carrying a cargo of valuable metals, including ingots of gold, as well as a quantity of industrial machine parts for the cotton trade. At the time the value of the lost gold ingots has been estimated at over one thousand pounds, now several million by today’s standards.

Also on board was a confidential cargo being transported under government warrant. 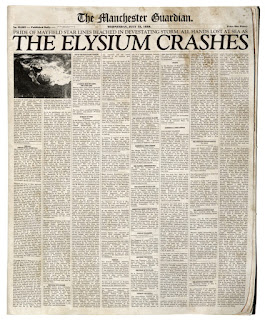 Mystery surrounds the circumstances of the wrecking, as no storm warning was issued in that sector, and weather conditions were described as calm.

Captain T. A. Solomon, the ship’s skipper, as well as the rest of the eight man crew were reported as being lost at sea to the coastguard’s office in the early hours of that fateful morning. 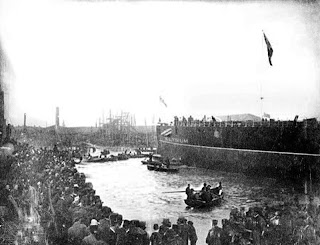 It wasn’t long before salvage rights were being contested by several local agencies.

Despite speculation as to the secret nature of the government cargo, Whitehall refused to comment on the nature of the artifact or artifacts. Crew records left at Mortimer House suggest the cargo may have been a statue, possibly of some value. Several eye witnesses to the disaster describe the figure of a woman emerging from the wreckage, one going so far to suggest she resembled an angel in appearance, but such reports were dismissed as wild fancy.

The exhibition on show at Ipswich goes into great detail about the history of the ship; its construction long -side its sister ship; with many recovered artifacts from the wreckage and commemorative mementos contemporary to the time. 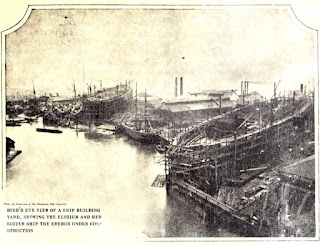 Our tour of the exhibition was greatly aided by the curator who joined us to guide us around the many display cases and photographs on offer. He presented a short visual slideshow of pictures of the crew of the ill-fated liner, as well as showing us the Elysium being built and its launch which was witness by a crowd of thousands.

And that is really as much as I can write about my trip, as after that point things really started to take a dramatic turn about which I feel I cannot speak.

The shared experiences of myself and the others in our twenty-strong tour party will be something no doubt we will carry for many years to come. It was shocking, and at times truly disturbing.

I wouldn’t have missed it for the world!!!

SPOILERS
DO NOT READ THE FOLLOWING IF YOU HAVE INTENTION OF GOING TO SEE THE EXHIBITION. YOU HAVE BEEN WARNED.


This has actually one of the hardest reviews I have ever had to write, as the experience of going and the ‘play’ itself was so fantastic, I cannot possibly write the review without hinting at what you might see or give away the plot.

EVERYTHING I HAVE WRITTEN UNTIL NOW HAS BEEN PART OF THE FICTION OF THE PERFORMANCE.

Before you even enter, the production is wrapped up in a mist of misdirection, with zero Doctor Who branding on show.

The staging is designed to resemble those council-funded regional theatres with low budget posters and information boards telling you the history of the scuppered Elysium liner - all of which is part of the illusion.

And where this works the best is that you just do not twig this until things really start kicking off. the curator who talked us through the exhibits is an actor, and the military SWAT team that burst in from nowhere and hijack the tour party take you by such surprise that it almost feels real.

We are seconded to their team and are marched to a waiting room where we are decked out in white boiler suits and drilled ready for our impending mission.

The Mission? To recover an artifact from a crashed space ship called the Elysium. Our only clue is that from the ship’s Doctor who may or my not have survived the impact. 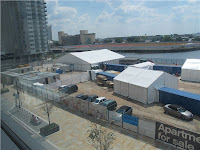 From here we are taken though a series of scenarios with frightening reality and nerve-biting danger. There are parts of the performance where we are called upon to recover clues and piece together the mystery surrounding the crash of BOTH Elysiums, as the significance of the Victorian incarnation is never truly lost.

At one point we are trapped in a corridor with a locked door at the end. Our military guardians are desperately trying to free the door, while the lights are flickering. Suddenly at the end of the corridor is an Angel. With split-second timing it progresses down towards us, only moving in true Angel style when the lights are lost. It is seriously real and amazing to experience.

But our escape is short lived as we are flung back in time to the 1800s and a fairground. The attack on our senses was total, with straw covered floor and the pungent smell of manure filling the air. You really felt like you weren’t anywhere near where you started and the imperative to get home felt higher than ever. . .

All in all it took an hour to play out the events, at the end of which I wanted MORE! You felt that this really was something you had never experienced before, and reading the background to the productions by PunchDunk in the past, it is a new way of looking at audience participation which raises it to a level rarely seen at the moment.

The Doctor Who Experience was pretty cool, and it plays out a you-are-there scenario too, but this was something else.

I cannot recommend it any higher!

Bet you wish you had gone now?

Posted by Steven Ricks Tailoring at 08:55

Email ThisBlogThis!Share to TwitterShare to FacebookShare to Pinterest
Labels: The Crash Of The Elysium