A Meeting Of Doctors - episode 1

The fiftieth anniversary of Doctor Who is coming into view on the horizon, and talk is turning to the notion of the ever popular multi-Doctor episode.

As part of my massive Cardiff photoshoot last month we imagined what it could be like if two of the Doctors met face to face for the first time . . .

So today I am bringing you the first part of A Meeting Of Doctors from the main photoshoot, where I brought together Kevin Coppa, one of the best 10th Doctor cosplayers; and Matt Elliott, the most awesome 11th Doctor look-a-like. 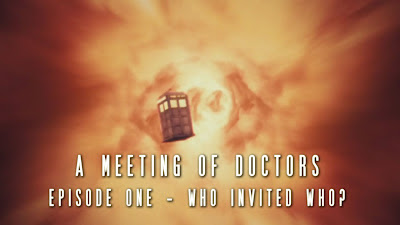 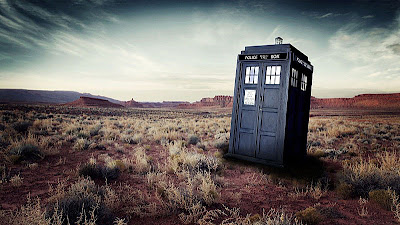 The Tenth Doctor steps out. Putting his glasses on he looks around, then heads for a lone diner on a nearby abandoned highway. 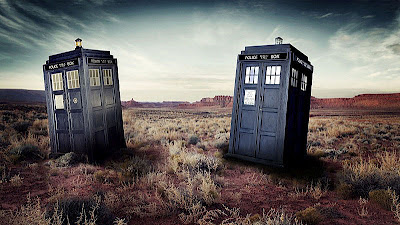 Once The Doctor is out of sight, the whirring noise of the TARDIS is heard again, but it is not his TARDIS leaving - it is a second TARDIS landing...

INT: DINER ON ABANDONED HIGHWAY
The Tenth Doctor finds a table at the diner, orders a milkshake and takes out a mysterious blue envelope. Inside is an invitation. He does not know who it is from or why he has been invited. All he knows is this is the right place - and time. 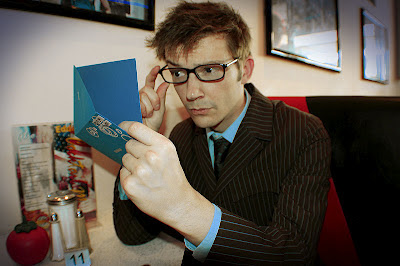 He doesn’t have to wait long before a tall, mop-headed, younger looking model of his later self boldly walks into the diner.

He too is carrying a blue enveloped invite - as is his companion Amy Pond!

They join the Tenth Doctor at the table.It isn’t long before confusion ensues: Who invited Who? 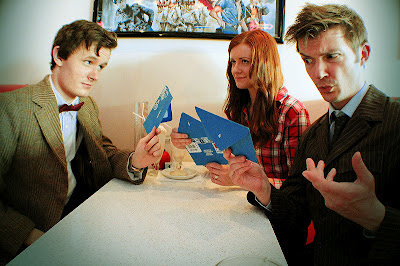 Posted by Steven Ricks Tailoring at 14:02