The Doctor at Collectormania Milton Keynes

This past weekend saw a big convention in Milton Keynes. In attendance were not only Karen Gillian, in her first convention appearance since finishing work on Doctor Who, but ALL five surviving classic series Doctors. 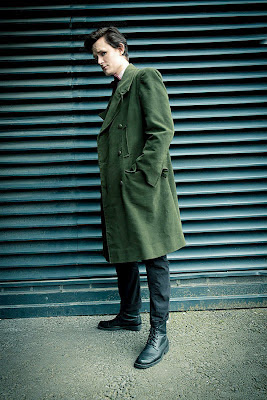 There was one other Doctor there – my friend Matt Elliott, the stunning Matt Smith look-a-like.

While he was there is met up with a mutual friend who now owns my original prototype Green Greatcoat.
It was a no-brainer Matt would get to try it on!

The coat is a “large” and Matt is a “medium”, so it’s a little big for him – though irritatingly it looks brilliant on him regardless! 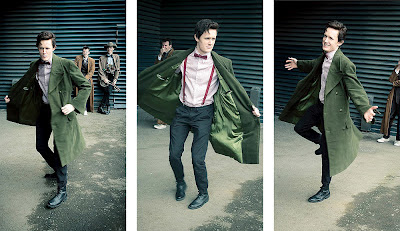 Both Matt Elliott and Lisa Baxter, who is the Amy Pond in my Cardiff photo shoot, got to meet the real Karen Gillian and have their photos taken.

Apparently Karen didn’t clock Matt for the photo, but took a MASSIVE double-take when he met her for an autograph!
Lisa, on the other hand, was complimented for her Girl Who Waited armour, so it was great she had her photo taken wearing it.

Lisa brought a lot of her costumes to Cardiff for our photo shoot, including her armour, so look out for some fantastic pictures very soon.
Posted by Steven Ricks Tailoring at 21:50