While trawling the fabric shops of London’s Soho, I recently chanced upon a great find - a bolt of Donegal tweed in just the right colour to match matt’s series 5 jacket! 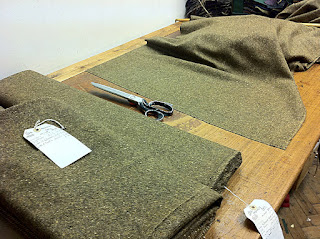 The original tweed had been sourced at W Bills, and was a hand-woven half-width cloth. There was two bolts in stock when I first went in, and these quickly sold out.
At the time I made enquiries about getting it rewoven, which was something W Bills was keen on doing, but the weavers could not reorder the same yarns, so their attempts were less than inspiring. 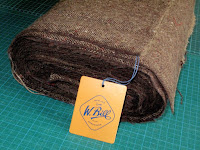 Later, when W Bills was sold to Harrisons, I had a meeting with them to discuss ongoing restocking of legacy Doctor Who cloths, and the Donegal was one of those we talked about.

Ultimately they produced a reweave, which overall was a visual match, but used a thicker yarn and had a notable red fleck which detracted from the simple duo-colour of the original.

The cloth I have stumbled across is woven from a yarn of a thickness between the screen-used and rewoven tweeds.

It has some very minor flecks, but in a light colour that do not distract too much from the overall look of the fabric.

I have made up a couple of jackets now in this new option, and it has proved very popular.

Personally I would recommend this cover over the current W Bill reweave, as it is closer to the original screen-used fabric.

I’ll make this new cloth the subject of a Fabric Friday very soon, so you can see a comparison between this and the two W Bill weaves. 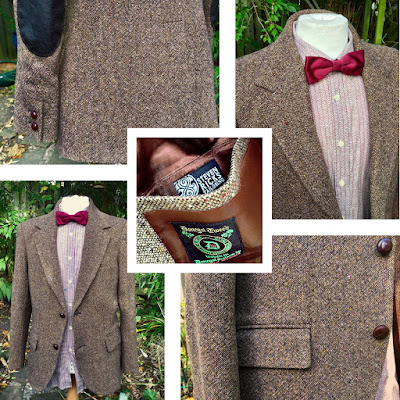 If you are interested in a bespoke made Donegal jacket which stocks last, please mail me at tennantcoat@me.com
and I can send you details.

Posted by Steven Ricks Tailoring at 10:22 No comments: