My good friend Bob Mitsch in the US has released the latest episode of his Costume Station Zero podcast!

Ewan Anderson joins Bob to talk about conventions, glories, mishaps and dive into the 11th Doctor’s Costume as seen in Series 5.

Episode 11 - The High Council Of Tweed

Posted by Steven Ricks Tailoring at 21:36 No comments: 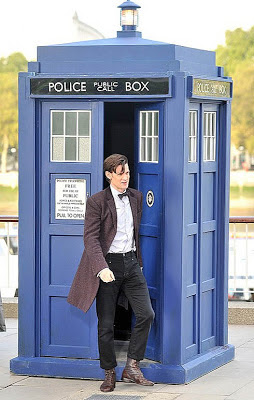 Now I don’t normally write about the day to day filming of Doctor Who - I prefer to keep things as spoiler free on my blog as possible - but this week saw a day’s work in the capital for the travelling Time Lord and his new companion.

This is a first for the Matt Smith era. Since Steven Moffat took over everything has been shot down in Cardiff or the surrounding area, unlike during Russell T Davies time in charge, when trips to London for Rose Tyler’s housing estate, or to use The Globe Theatre were a regular highlight of a season.

In fact the recent series seven episode The Power Of Three - correct me if I’m wrong - was the first story to have scenes set in London, though a Welsh castle stood in for the Tower Of London.

But finally, after two and a half series - the TARDIS has landed!

Look away now if you don’t want to see what's been going on.

My good friend Bob Mitsch in the US has released the latest episode of his Costume Station Zero podcast!

This time it has a MONSTER flavour!

Mette Hedin and Bryan Little join Bob to talk Doctor Who monster making including the Vashta Nerada, Silurians, Sutekh the Destroyer and Ood.
You can see some of their costumes in a masquerade skit from 2009 called Timelord Retirement Club.


Posted by Steven Ricks Tailoring at 18:27 No comments:

I’ve had a number of emails lately from parents looking for Matt Smith costumes for their children.
Working as a bespoke tailor it isn’t possible for me to make such clothes cheaply. After all a child’s jacket still has two sleeves, a collar and lapels as well as the necessary pockets and detailing.

As an answer I have always pointed them to eBay in search of bargains.

Just to show what can be found, here are half a dozen items currently available, or recently closed.

This shows the price range of options available, so keep searching – they are out there. 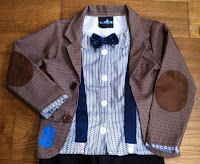 The first of these is actually an officially licensed dressing up outfit from UK clothes retailer, Marks & Spencer. 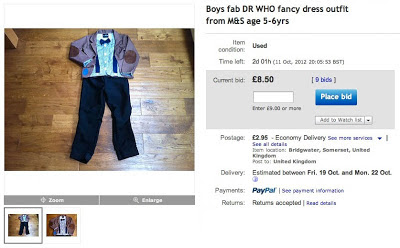 Cyan is the new TARDIS blue

I ended up in central London over the weekend, intending to spend the whole day at a Radiophonic Workshop event on the South Bank.
It didn’t quite shape up as I thought it was going to be (everything got way to technical for a casual listener), so kicking my heals with time to kill, I thought I’d do something I had been wanting to do for a while - revisit the Police Posts around the City Of London. 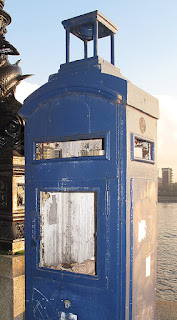 I first visited and documented them in 2010, but one I had expected to find at Liverpool Street Station was strangely missing. This I listed as missing in action.
The rest were still there, but in a pretty sorry state of repair, especially one on the Victoria Embankment.

On a passing return trip in 2011 I noticed several of the posts I had photographed had also since vanished. Being made of cast iron, I did have concerns they had been stolen by metal thieves, a crime on the rise due to commodity values soaring in recent years.

But last month I spotted a photograph on a Facebook friend's page, showing the Liverpool Street Police Post. It was back - and sporting a new paint job!

It's got me wondering if the other missing posts had received the same restoration - hence my plan to revisit them now.

I took a tour of all the posts under the control of the City Of London authority. Here is what I found.