A Meeting Of Doctors -
when fiction becomes FACT

I hope you enjoyed our A Meeting Of Doctors photo-story I have been running over the past few days. 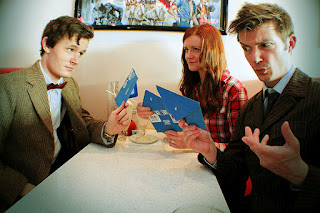 As well as having enormous fun doing it, the shoot was a logistical challenge to get everyone there at the same time; with all the props we needed; at the location we wanted; on a day we could shoot without being noticed too much.

I’m happy to say we achieved everything in my list –
except the last one ... 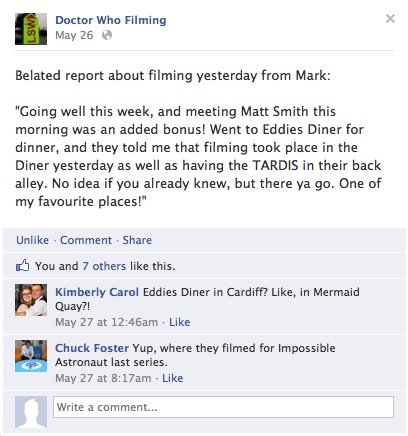 We did our photo-shoot at lunchtime on Thursday May 25th, and by the next day it had been reported as FACT that Matt Smith had been back at Eddie’s Diner filming new scenes for series seven!

it first appeared on Doctor Who Filming – a fan run Facebook page which documents all the filming as it happens.

Quite where the TARDIS in the back alley came from. We WISHED we had one, but didn’t.

This got picked up on Gallifrey Base, from where things seem to snowball.

The Power of the Internet!

I wanted to chip in an reveal it was all a misunderstanding, but to do so would have spoilered my blog before the photos could be published.
Funny how our little photo shoot led to some wild speculation!
Posted by Steven Ricks Tailoring at 14:44

Email ThisBlogThis!Share to TwitterShare to FacebookShare to Pinterest
Labels: Meeting of Doctors