Last month I had to get a Shetland Tweed jacket done for a client in time for a photoshoot in New York’s Central Park.

The photos are in, and the client was happy! Here’s what he had to say about the jacket I made him. 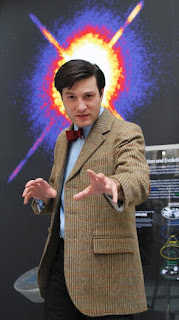 Any reservations I had about the price tag on Steve Ricks’ replica 11th Doctor tweed were immediately thrown out the window the moment I pulled it out of the shipping box.

This jacket, even though made out of the same fabric as my previous Doctors’ tweed from another leading costume maker, just FEELS more solid. The gorgeous white liner in the sleeves just makes this jacket look and feel more luxurious. 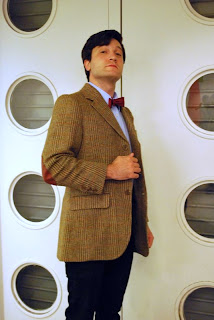 Not leaving anything to chance or error, I sent Steve one of my own jackets that fit me perfectly to use as reference when creating this new replica. That was one of the single best things I could have done as Steve absolutely nailed the fit and even accommodated my request to ensure the sleeves were cut slightly shorter just like Smith’s jacket. 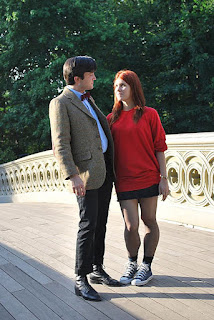 The details? Well, there is no arguing the authenticity of the details because Steve has done the homework on this and I have to admit, I felt a lot of confidence wearing this knowing it was created with a wealth of knowledge and appreciation backing it.

My jacket arrived to me just in time for its maiden adventure to New York City for a day at the American Museum of Natural History and Central Park. 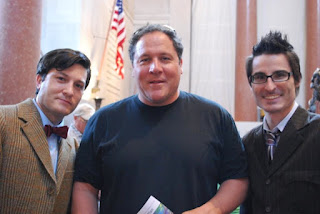 One of the highlights of our Museum experience was a chance meeting with actor and film Director of the
Iron Man movies, John Favreau, who was visiting the Museum that day with his family.

After a timid introduction of myself and expressing my fandom of his work, I told him my group was there dressed as Doctor Who characters. He looked my wardrobe up and down and replied “Very well done!”

Of course, we were constantly stopped no matter where we went for photos by both other visitors and even many Museum employees. 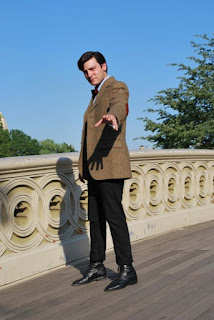 Before the day was out, we ventured into the 90-degree weather for a trek through Central Park to find the famous “Bow Bridge” which is going to be featured in an upcoming episode of Doctor Who (see above).

With some luck and a little help from a local friend, we found we were not that far from the bridge from the entrance we came in - good thing too, in the heat, we may not have had the energy to walk to the opposite side of the park.

Sadly, we did not have the energy to find other filming spots in the park, but I am happy to have had several great photos of me wearing Steve’s replica tweed on Bow Bridge, even a photo mimicking the picture of Matt Smith running on the bridge, which had been going around online after production concluded filming there. 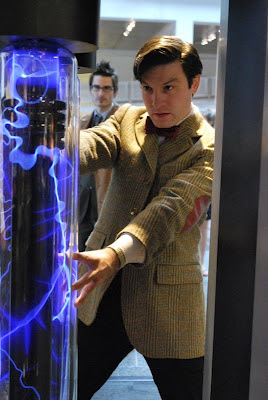 Our next stop was in Philadelphia, Pennsylvania the next day for a trip to the Franklin Institute. Being a science-oriented attraction, this interactive museum was a perfect tie-in for a Doctor Who cosplay outing. As with New York, we found that many Museum patrons and employees were fans of Doctor Who and we were swarmed many times for photos.

I have to say, I can not be happier with the work Steve has done with this jacket. His level of commitment, attention to detail and passion is second to none and he is certainly THE go-to person for replica Doctor Who costuming. 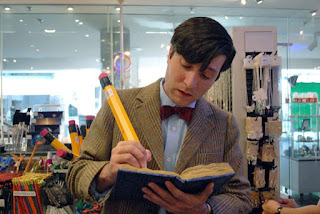 He was absolutely pleasant to communicate with and his relentlessness for quality and accuracy shows through with his passion for Doctor Who wardrobe.

One thing is for sure, I will feel confident and privileged to wear this jacket to any and all conventions and events wherever I go and am fortunate to have made this purchase.