Doctor Who Experience: Cardiff -
THE OPENING

After a six month absence, the Doctor Who Experience reopens today at its new purpose-built venue in Cardiff bay, barely a stones throw from the new BBC studios where the series is now shot. 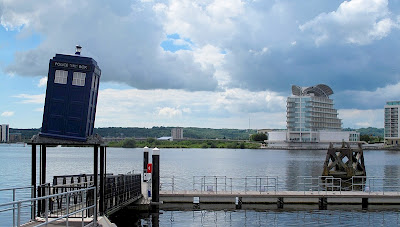 I booked my ticket last month as soon as they were available, plus a return train trip so I was all prepared well in advance.

It meant an early start, but it would be worth the effort - or so I thought.

Trains to Cardiff depart from Paddington station in London, and I got there in plenty of time to discover someone had been hit by a train on the line and all departures were cancelled for the foreseeable future. Great.
The station was packed with disgruntled passengers looking disbelievingly at the departure boards of doom.
My planned train was listed as delayed, but this was soon revised to cancelled, dashing my hopes of departing on time.

Signed up to the air of despair, I sat waiting and listening to the endless repeating announcements and I started to wonder if I was gonna get there in time.
The next train I could get was flashing delayed too, but then suddenly switched to boarding, prompting a mass stampede towards platform 9! Swept along in the rush, I managed to sprint to the front of the trains and a near empty carriage, bagging a table seat in the process. The train quickly filled, with standing room only, and after a bit of a delay we set off - only 45 minutes later than planned. 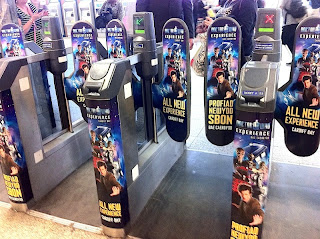 So after a shaky start and wondering if I was going to miss the whole thing, I finally arrive in Cardiff, with time to spare.

The ticket barriers at Cardiff Central station were decked out with Doctor Who Experience branding, which was cool. 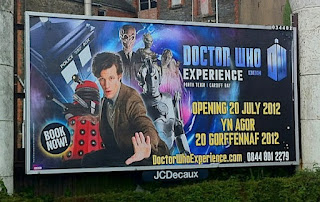 Having visited the area twice before, I know the walk from the station to the bay quite well, and it was a nice day so I took my time. As it happened I passed a billboard poster for the Experience, which I might have missed otherwise.

It wasn’t long before I was passing the Millennium Centre, for me still full of happy memories from the Official Convention and our Girl Who STILL Waited photoshoot. Coming around the bay there was a bit of a buzz, with people in front of me heading in the same direction, many wearing Who-related t-shirts. 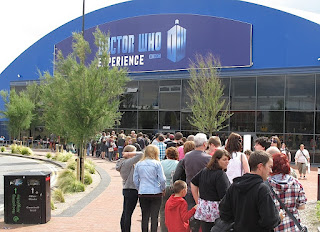 I had visited the site of the new home to The Experience in March, so I knew where I was heading, and by the queue so did everyone else!
There were a LOT of people queued up waiting for the noon opening. 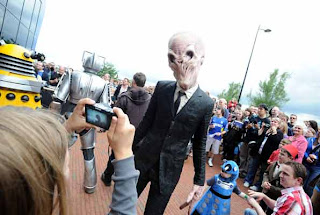 To entertain the crowd, a Dalek, Cyberman, Silence and Silurian were on patrol for photo-ops, with some concerned looking kids keeping their distance with their parents for protection.
As the queue slowly moved closer to the entrance, I was approached by a couple of Who fans I had seen at Chicago TARDIS last November! They had come over specially for the opening. That’s dedication for you. 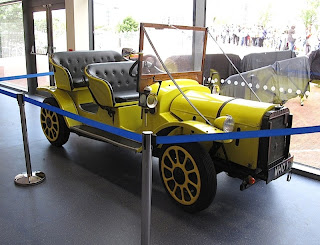 In the lobby I was surprised to see Bessie, Jon Pertwee’s trusty car. It was cool to see, but I did wonder if any of the kids coming today even knew what it was.

Around the walls of the lobby are a series of graphics depicting monsters from the new series, and strangely an image of an Ice Warrior dating back to the Patrick Troughton era. I wonder if that’s a clue of what’s to come in series seven? 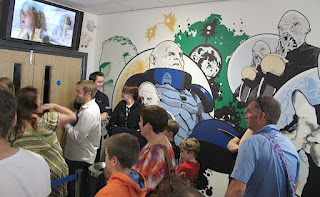 Ticket checked, I was finally inside the building and in the queue to see the Experience part of my visit. My ticket is for a one hour entry slot, which is a bit flexible, and you enter in groups of around 20 to 25 people. As you move through the stages of the interactive show, the next group is entering behind you unseen, so I guess around three or four groups are at various stages at any one time.

Check back soon and I’ll tell you what to expect to see beyond those entry doors . . .
Posted by Steven Ricks Tailoring at 18:44