The Girl Who STILL Waited - episode 1

Today I’ve got some more pictures from my Cardiff photoshoot.

As well as visiting Eddie’s Diner, we also gained very special access to the Cardiff Millennium Centre. Not only was it the venue for the recent Official Doctor Who Convention, it was also the location used in the David Tennant story New Earth and the Matt Smith adventure The Girl Who Waited.

I had originally met our Amy Pond for the day, Lisa Baxter, at last years Entertainment Media Show, where she debuted her armour barely two weeks after The Girl Who Waited was broadcast.
So when I was planning our Cardiff shoot, I knew SHE was the one Amy I wanted along! 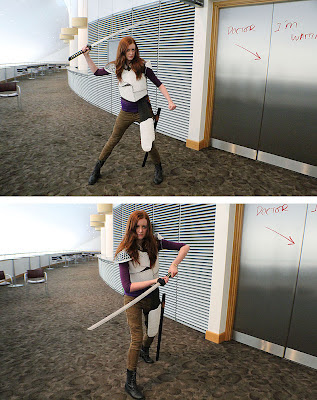 I made a particular point of approaching the Cardiff Millennium Centre so we could visit the upper galleries and see the doors where Amy wrote her lipstick message to The Doctor.

Here is the first part of our mini episode - The Girl Who STILL Waited. 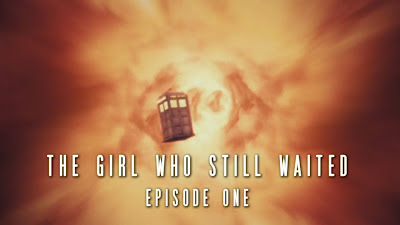 INT: TWO STREAMS FACILITY - LOBBY
Amy has found herself trapped in a parallel timeline, isolated from The Doctor and Rory. 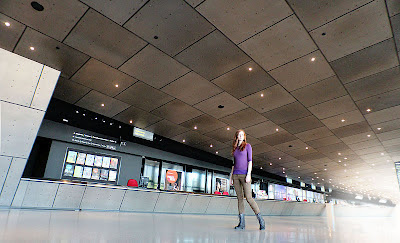 In the lobby she hears a voice from above.... 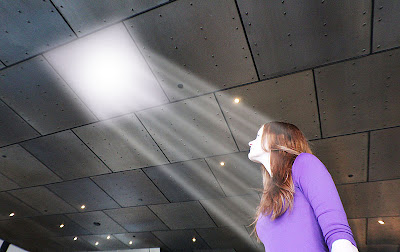 INT: TWO STREAM FACILITY - GALLERY
Later Amy, now many years older, meets her younger self.
The two Amys devise a plan to find The Doctor, and they set out to search the facility until they find him. 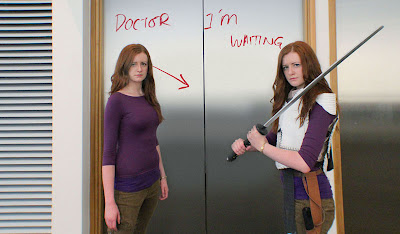 Amy finds herself drawn to a door where she had earlier left a message for The Doctor. 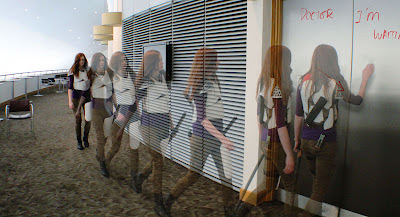 Touching the door she feels a connection to her Time Lord custodian. 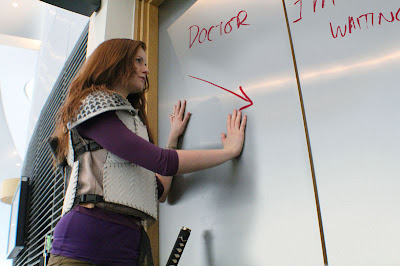 Suddenly the door flies open to reveal THE DOCTOR . . . 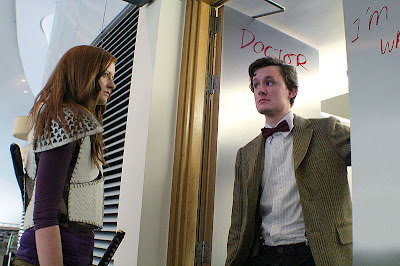 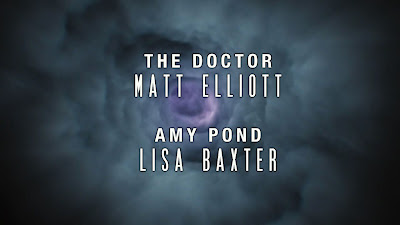 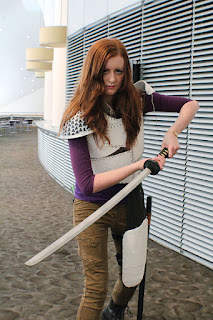 Lisa made her costume in two and a half weeks, using limited materials and for less than £60!

Under the armour she is wearing the screen curate camel-coloured jeans from Topshop.
The jacket is supposed to be a £100ish Topshop pink leather jacket with the arms cut off, but she used a £5 look-a-like found on ebay as 90% of it is hidden under the armour. 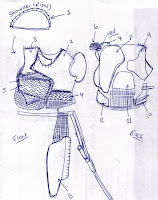 First, using screen caps, she sketched out the overall design to break the costume down into the 13 parts needed.
From this she cut the sections in cardboard and once she was happy, built them up in
papier mache PVA glue and free Metro newspapers! 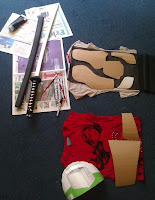 Once dry, she then painted them with acrylic paint mixed with more PVA glue. 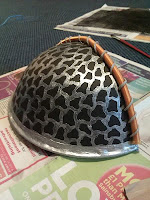 The shoulder panel was made from a large sieve found at a 99p shop. This was cut in half and as before covered it in papier mache.
Once dry it was painted with black acrylic and using a silver gel pen, had the mesh pattern drawn on.

The rim with painted with silver metallic acrylic paint, holes were stabbed along the top edge in order to thread silver-painted-string through. The yellow jump lead was secured with superglue. 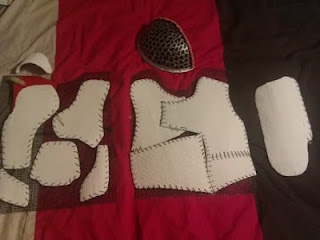 Finally to secure the sections together, she painstakingly stabbed rows of holes around the edge of each armour section. String is then used to attach them to black-painted ovenproof mats to make the front and back armour plates.

The front and back armour panels were then strapped together, leaving space between to wear it.

The sword holster was made very quickly and inaccurately from three £1 primark belts sewn together around the scabbard. Simple, but effective.

Posted by Steven Ricks Tailoring at 14:07

Email ThisBlogThis!Share to TwitterShare to FacebookShare to Pinterest
Labels: Matt Elliott, The Girl Who STILL Waited