A Summer Of Tours

Thank heavens June is over!
It’s been the busiest month since I left full time employment, and my most productive by far.
I work very hard as a tailor and set myself a target of dispatching one garment a week, wether that be a Utah Shirt or a more complex Tennant Coat or or Greatcoat.
Well this month I hit nine items, over half of which were in the upper end category - a personal best to date! 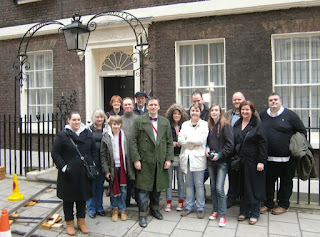 But as well as chaining myself to the trusty treadle-mounted Singer, I’ve also been out and about doing the BritTours guided tours of London Doctor Who locations - and that’s been the busiest ever too! I’ve done almost a dozen tours this year - peaking this month at a little over one a week.

Although the route and content is the same, each tour turns out slightly different to the previous depending on the memeber of the tour party and the conversation we have between stops.

A little while back I did a tour where we arrived at John Adam Street, only to discover it was dressed as Downing Street, just the same way it had been for Aliens Of London back in 2005. That was the highlight of the tour that day.
As a group it was funny how excited they all got over seeing the man-hole cover seen in The Invasion! We also had a protracted discussion about how The Doctor’s Daughter (Georgina Moffat - both I screen character and real life) was now The Doctor’s Wife (as in married to David Tennant - not to be confused with Idris).

Here’s a look at my diary of the summer, with the highlights of the tours I have done.

This time I took a private tour for a family who’s son was a big Who fan. We had discussed many thing on our way around, and Mark Gatiss’s name came up a few times - only to then bump into him in person at Forbidden Planet at the end of the tour!

My next tour was a private walking tour for a father and his two daughters.
They had done the Harry Potter tour a few days prior, so were now enjoying a tour of Doctor Who locations as well.
A highlight of this tour was having crossed Tower Bridge, we looked back from Butlers Wharf to see the bridge rising. Awesome sight.

Against my better judgement I also had a tour the following day - but at least the next would be a bus tour instead.

I was then asked to do a private tour which was a birthday present for someone who was a huge Doctor Who fan.
We all met up at the designated spot and I was looking out for a boy of 8 or 12, with the intention of making it his special day. The birthday boy ended up to be a bit over 40 - and he had a very fun time seeing the classic series locations, many of which he recognised from first viewing all those years go. 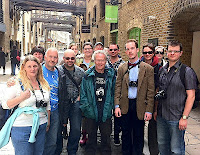 Then, after weeks of doing these tours, I had my first public tour with not one but two people in cosplay! FINALLY I didn’t feel alone being the only one in costume. We had an English guy dressed as Matt Smith, and an American girl with a Forth Doctor scarf in a pastel colour scheme.

Next up was another nice family from the US, doing the European tour, stopping off in the UK for a few days, and taking in a tour of London while here.
This was one of the nice tours in a mini bus.

Then it was back to the public walking tours. This time the day after I attended the London Film And Comic Convention at Olympia. I had planned to go on to the second day of the convention on the Sunday following the tour, but having been on my feet all of Saturday then walking for three hours the next day - I decided to give it a miss! Can you blame me?

My final tour of the main season was a private tour for a family of three from Canada. Another walking tour, it was a pleasant end to my summer of Doctor Who Tours.

Due to the Olympics, we aren’t doing any tours during mid-July or August, so that’s me now until September.
Posted by Steven Ricks Tailoring at 19:54