So, I was up in Oxford Street yesterday, doing a bit of fabric shopping; visiting some suppliers; and just generally browsing around. 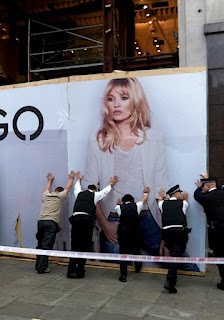 Luckily I wasn’t around when the Kate Moss hoarding collapsed on passing shoppers!

But while I was on London’s leading retail street I did drop into John Lewis. Looking around the menswear department I was struck by how many tweed jackets with elbow patches were on the rails.

It wasn’t just one isolated option – there was a whole choice of colours and fabrics, as well as makers.

Here’s what I spotted. 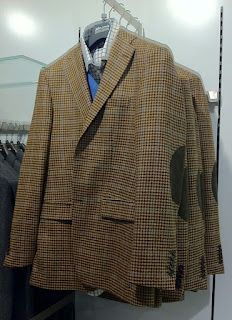 This is quite a nice jacket, with flapped outer pockets, dark brown elbow patches and a notched collar.

On the downside it does have five buttons on the cuff vent and looking at the label it isn’t a genuine Scottish or Irish tweed, having been woven and made in Italy. 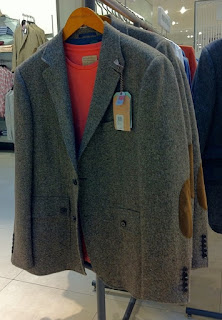 This jacket is in a Donegal-style fabric, though from the label is was woven in the Shetlands. At least it is a British cloth.

On he downside the fabric is more grey than brown; it has buttoned collar tag; brown suede leather elbow patches; buttoned outer patch pockets; and five buttons on the cuff vents.

It is described on the sales label as TWEED WORKWEAR BLAZER, NATURAL £225 Thought I’d mention this jacket too, but it’s starting to get further away from the Doctor Who look.

It’s more of a houndstooth weave, which is more chunky looking. It has a buttoned collar tab; buttoned patch outer pockets; and five buttons on the cuff vents. 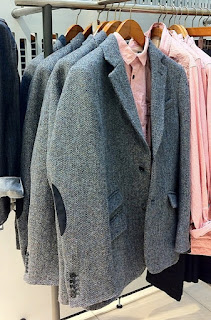 This final John Lewis jacket is more tailored and pulls in details more commonly seen in a suit.

It is in a grey Donegal-style fabric, with dark grey suede elbow patches; the outer pockets are flapped, but sloped with an additional money pocket on one side. 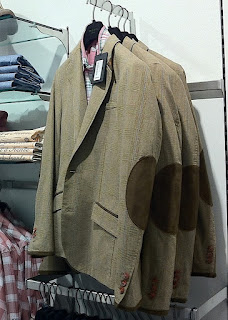 While I was there, I noticed a Ted Baker concession rail with a plaid style jacket with brown suede elbow patches.

It has the usual Ted Baker design details, with sloped flapped outer pockets accented with welts matching the elbow patches. This same fabric is used around the cuff edges.


Posted by Steven Ricks Tailoring at 10:00