A new job - and a familiar face

Don't worry, I'm still a tailor and don't plan to change that any time soon, but what I have done is add a new feather to my cap. 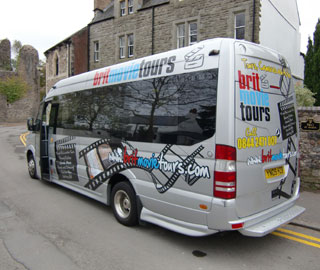 If you are a regular reader of my blogs you may have seen a couple of years ago I went on a guided tour of the Cardiff Doctor Who locations. I went with Brit Tours, who as well as their Doctor Who tours, organise tours based on other popular film and tv franchises such as Harry Potter, James Bond and Notting Hill. 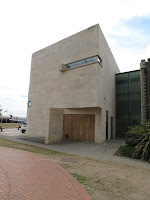 I enjoyed the tour, but felt it could have been a bit better and the tour guide a bit ore knowledgable (we walked straight past a Torchwood location in Cardiff Bay which I had to point out).

Not wanting to detract from what they were doing, I drop them an email - not complaining, just suggesting it could be better, and I could be the one to help out!
I didn't get a reply, but over a year later I did receive an email following up on my offer.
To cut a long story short, I met the organiser of Brit Tours and explained my situation. He realised I would be perfect to handle the London based tours they run, as well as being available for private tours that are arranged for small groups.

This week I got a call that a family of five were in town for a few days and wanted to see the sights of London through a Doctor Who lens.
Usually the tours are on a mini bus, but this would need to be awaking tour, something I had done often for friends and fans in the past. Bob Mitsch, Ian Cummings and Mark Ferris all enjoyed the chance to walk in The Doctor's footsteps.

Being on foot the locations we could visit were a bit limited, but we got in a decent number in the afternoon. 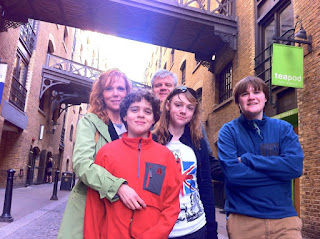 The family who were in London from Ohio, was made up of Jennifer and Bob, and their children, Sam, Jessica and Michael. Sam was the big Doctor Who fan, so the tour was. Any for his benefit. I chatted to him the most and I think he appreciated a willing ear for his outpouring of Doctor Who fandom.
I was more than happy to recount my favourite episodes, Doctors, assistants and locations.

The Globe Theatre, the main location for The Shakespeare Code

Butlers Wharf, the stunning setting for Resurrection Of The Daleks

Southwark Cathedral, the location of the closing scenes of The Lazarus Experiment

Windmill Street, the battleground for the warring Dalek factions in Remembrance Of The Daleks

The London Eye, which was the Auton transmitter in Rose

we visited The Stamp Centre, which has a lot of Doctor Who memorabilia

walked through Covent Garden which cropped up in Invasion Of The Dinosaurs, and finished at Forbidden Planet on Shaftesbury Avenue.

Sam’s eyes were like saucers when he saw the endless amount of Who merchandise available, and with the tour officially finished I left them to peruse the shelves for something to remember the day.

As I left I spied a familiar face. None other than Mark Gatiss, writer of a number of new series episodes, and star of The Lazarus Experiment which we had only been talking about an hour or two earlier. I helped Sam to get the chance to meet Mark, before I had a brief chat with him myself.

I'm not normally out to accost celebrities on their free time, but Mark is someone I genuinely admire. I have always enjoyed his acting as well as his writing. He is superbly sinister and smug as Mycroft in Sherlock as well as co-writing this amazing remaining of the works of Arthur Conan Doyle.

He was very gracious and agreed to pose for a very quick photo with me. 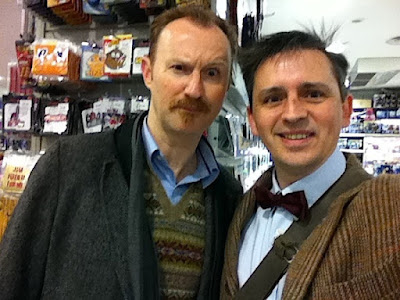 A I said to a friend who has already seen this picture, I'm not sure which is funnier - Mark's facial expression or the fact that I was in full Matt Smith costume!
Posted by Steven Ricks Tailoring at 20:21