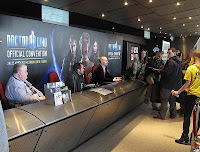 I have to say I have been very impressed with how well the convention has run so far. It has been slick and well timed and as a group we have been moved around the Millennium Centre with ease and not missed any headline timetable event. Bearing in mind there are 1,500 people here, I think that is saying something.

So far I’ve seen the Creators And Directors panel; the VFX demo by Danny Hargreaves; part of the Millennium FX prosthetic demo; and a talk by the Doctor Who Restoration Team.

Having grabbed some lunch while taking in the last of these, I wandered through the reception area, seen in New Earth and The Girl Who Waited, and realised the queue for the next big panel, Meet The Stars, had hardly begun to form, so I join the line, only a dozen or so from the front.

It was a good 45 minute wait, but once we were allowed in I managed to grab a seat on the second row, right at the front - prime position! Result!! 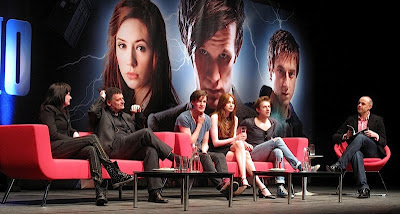 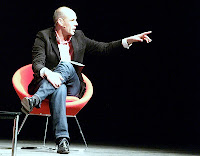 I wasn’t too long before the panel was ready to start, moderated by Jason Mohammed, a Welsh sports reporter, who has the distinction of appeared in Doctor Who as a news anchor in Voyage Of The Damned.

After some cheap patter to arm us up he introduced the panel, made up of executive producer Caroline Skinner; lead writer Steven Moffat; the ever popular Arthur Darvill; Karen Gillian; and the man everyone had been waiting to see, Matt Smith. 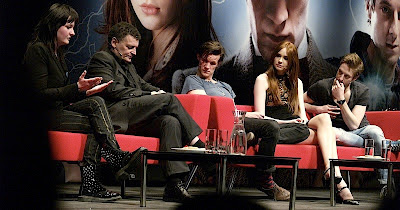 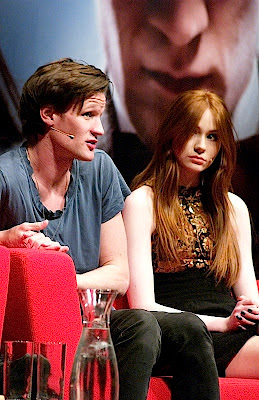 The packed auditorium erupted into cheers and applause for everyone as they came on stage, moreso for Matt.

Once everyone was settled it was time to start grilling the panelists, asking them first when they became aware of or watched Doctor Who.

Steven had been watching the series from a young age, and had even been writing his own short Doctor Who stories. Look at him now. 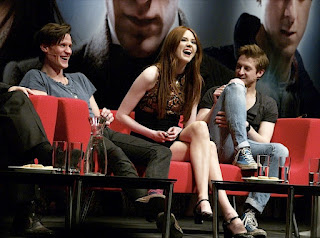 The others had obvious come to it much later, but their enthusiasm showed in how they talked about it and what an honour it was to have the chance to be part of that history today. 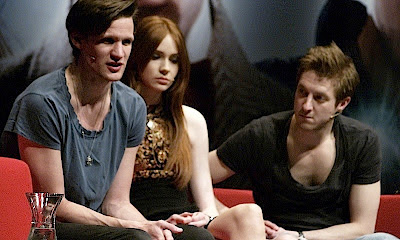 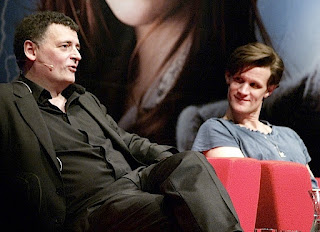 Talking about the casting of Matt, Steven Moffat explained that he had a vision of an older actor in the role, but was lead by casting director Andy Prior who said it was all about depth and not age. Matt’s audition stood out and the rest is history.

Matt and Arthur had worked before on stage, so when Arthur heard Matt had got the role his immediate thought was wanting to get a pencil case with Matt’s face on it! 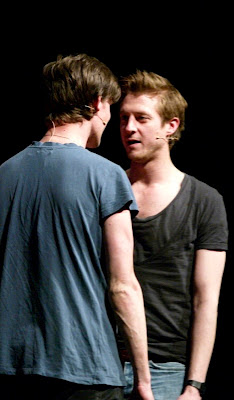 He revealed it was a while later before he also got cast, though he thought he had missed the chance.

Matt is great with audiences. I remember back at the preview of The Pandorica Opens he took the trouble to speak with Jack Vernon, who had a special present for Matt.
This time round it was Matt handing out the presents. I gather at the morning session he had been handing out Jammie Dodgers to anyone dressed as The Eleventh Doctor. 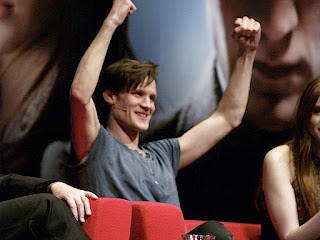 The questions were soon thrown open to the floor and a roving microphone made sure everyone got heard.

Some one asked how it felt to be the fastest Doctor around the track on Top Gear, which had only been sown a couple of weeks ago. Matt seemed pleased the topic was raised and he bragged about his driving prowess.

A few series seven spoilers had been creeping out, and the panel expanded upon these, mainly to confirm what had already been know.

The story of Chester: 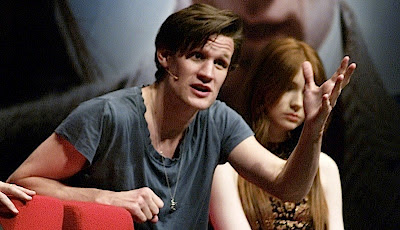 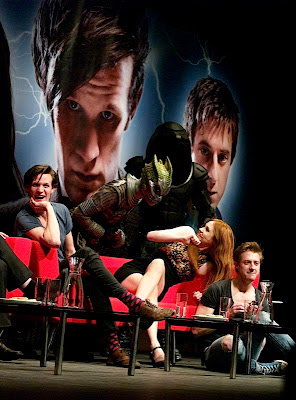 Calling time on the panel was a Judoon and Silurian who strutted out on stage. the latter freaking out Karen as the Silurian sniffed her head to toe!

All in all it was a great panel and some interesting stories came out.

Some attempts by the audience to prise out additional tidbits about series seven failed to provoke a response other than “next question”, and rightly so.

The convention is giving unprecedented access to the very core of Doctor Who and to know too much about what is coming would spoil the surprise. 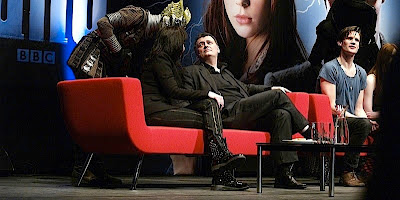 Posted by Steven Ricks Tailoring at 20:41