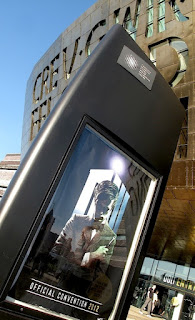 So the day has finally dawned. Booking opened on the ticket back on 14th November last year, so it’s been over four months coming, so I can’t believe today is the start of the first official Doctor Who convention.

The convention opens at 9am, with the first timetabled event at 9.30am.

I don’t want to be stuck at the back, so I got up bright and early and was down at Cardiff Bay by 7.30am.

The queues had barely begun to form, so it looks like getting up early has been worth the effort.

To maximise the number of people through the door, but keep a cap on crowds, they are running two identical programmes in parallel, with the same event taking place at different times.

These tracks are labelled OOD and SILURIAN. Today I’m Ood (tomorrow I’m Silurian) so I found the right queue I was only 14th in line for entry! That’s a relief, but a long wait ahead. 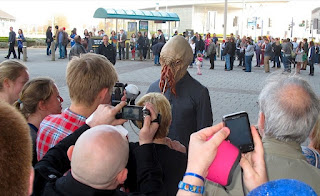 While waiting for opening time, we were kept entertained by the obligatory costumed Ood and Silurian who peered at the waiting fans and posed for photographs. 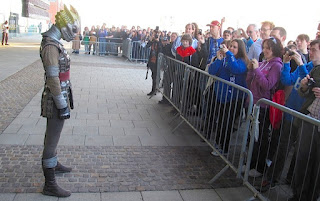 At the side a queue for the TARDIS tour formed, and off they went in their coach - that will be me tomorrow! 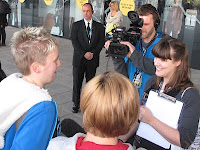 Slowly the queue built up behind me, snaking off around the corner of the Millennium Centre and out of sight.

About 20 minutes before opening, the event crew started moving down the line and checking tickets, compressing the line as they went.

Then it was time - the doors opened and we were ushered in. We were quickly guided up to the Donald Gordon Theatre, the largest auditorium in the venue. Being so closet the front of the queue, I was able to get a front row seat. 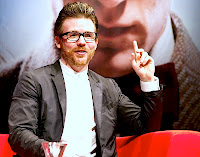 The first panel we saw was Creators And Directors, which was hosted by Gary Russell. The focus of the discussion was one single episode: The Girl Who Waited, with writer Tom MacRae and producer Marcus Wilson, beforing being joined later by prop maker Robert Allsopp and prosthetic wizard Neill Gorton.

It made for a very interesting discussion, with Tom asking us through the writing process, revealing his hook for the plot was the spyglass, where you could see the same place but in a different time zone. Many of the other ideas followed separately before a final script was arrived at. 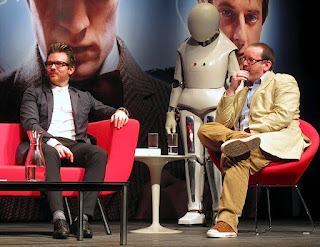 Asked about the Handbots he confesses his driving force was the notion of writing a robot that could be a toy and imitated by kids in a playground. Shameless. 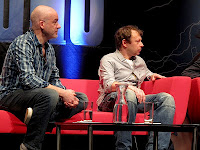 Robert and Neill contributed their involvement in creating the Handbots, and ageing make-up for Old Amy, before the questios were opened to the floor in a Q&A.

The first panel finished, it was time to move on and we needed to vacate the hall to allow the Silurian ticket holders to come in after us. Exit was by a narrow corridor which created the most almighty bottleneck.

The next thing to attend was a demonstration by SFX supervisor Danny Hargreaves. Being so late leaving the discussion panel, I wasn’t holding out much hope of getting into the SFX demo. The queue was long, but fast moving and I was ushered in and ended up on the near back row and was almost the last to get in. This was a much smaller space, so I could still see everything.

Danny was a bit of a cheeky chappy, ducking and diving as he showed off some of the tricks of his trade, and answering proving questions from he audience.
There were a few surprises along the way, with an enormous indoor explosion to kick the talk off. Everyone leapt out of their seats while Danny barely blinked.
A couple of audience members were roped in to show a laser hit to a passing Cyberman.
The talk was fairly short, but concise.

Leaving the demo, the next thing to see would bea prosthetic demonstration by the Millennium FX team, headed by Neill Gorton. I had missed the start of this, but wasn’t too upset since this is a rolling event taking place in the foyer all weekend. I’ll catch it another time.

By this time it was noon, so I dipped sideways to get some lunch and have a five minute sit down.

The prosthetic demo had been replaced by a talk by The Doctor Who restoration team, who do sterling work on the DVD releases of the classic episodes. I missed the start, but caught most of this and all of the video clips they brought along with them to show. Their work can be quite jaw dropping, when they are recreating missing or damaged frames of episodes with retouched images generated from adjascent section of film. Their work cleaning up and stabilising the picture so it makes for a more satisfying viewing cannot be under-estimated. 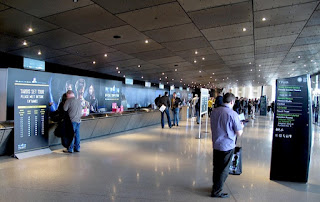 From here I took a wander through the lobby, which had been the location for New Earth and The Girl Who Waited.

I wasn’t quite sure where to go next, but then I realised it wasn’t too long before the Meet The Stars panel would be happening for the Ood programme, so I headed up to find the queue.

Amazingly there was only a dozen or so people there, so I joined and settled to writing the start of the entry you are reading right now!

I just had to wait now for 1.30pm, and the highlight of my day.
Posted by Steven Ricks Tailoring at 01:00