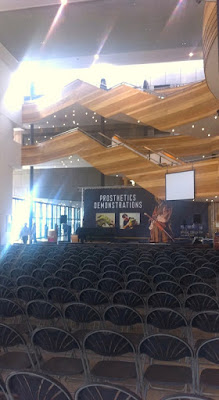 The Cardiff Millennium Centre is a pretty big building once you are inside, and the organisers made good use of the facilities.

Tucked away in a room near where the SFX Demo took place was a cut-down version of the exhibition, last seen as part of the Doctor Who Experience at Olympia.

The experience had close in late February 2012, and is due to reopen at a purpose-built venue in Cardiff Bay later this summer.

This has left the contents of the exhibition in storage while the new building is constructed, so for the Convention as much as possible has been put on display here for everyone to see.

Here is what was on show. 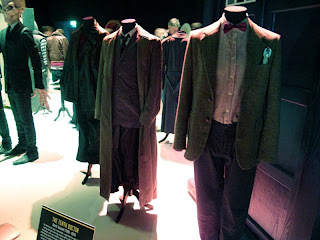 In the centre of the room was a display of mainly Doctors and companions.
The first thing you could see was the Matt Smith TARDIS, flanked by his series five costume (without the creepy head) along with the David Tennant and Christopher Ecceslton.

Next to them stood The Silence, Davros and a Cybershade with a Cyberman on each side. 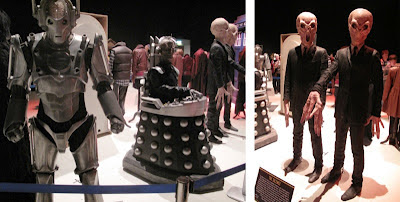 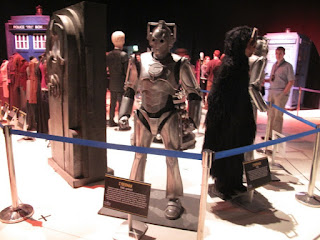 Around from the Cybermen was a cryogenic cabinet from A Christmas Carol, followed by a line of companion costumes. 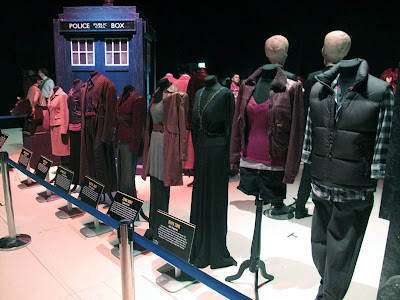 Coming back round to the Matt Smith TARDIS, the line up was completed with K-9 from School Reunion. 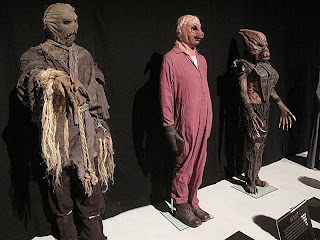 Around the perimeter of the room were the rest of the aliens and villains.

Some were stand-alone displays; other small tablous from specific episodes.

On display were a scarecrow from Human Nature; a pitman from Evolution Of The Daleks; the Hoix from Love And Monsters; as well as groups from Fires Of Pompeii and The Beast Below.

Elsewhere were a space suit from The Silence In The Library; a Hath from The Doctor’s Daughter; a Heavenly Host and Life Support Chariot from Voyage Of The Damned. 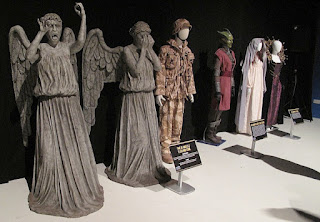 There were the now obligatory Angels from Time Of The Angels; a Silurian from The Hungry Earth; and a Vampire from Vampires Of Venice. 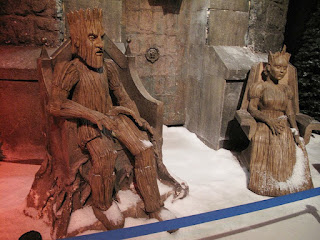 The last main display was of the Wooden King and Queen from The Doctor, The Widow And The Wardrobe.

There were also the display cases of sonic screwdriver and weapons, but they are so badly lit and were positioned right by the door, it was impossible to get decent photos.

I know space was limited and not everything could be displayed, but I was surprised by the lack of proper Daleks on show.
Especially since they were not around the rest of the convention. I was expecting one or two to be outside to entertain the queues. Nothing. I wondered if they would be in the lobby to scare people as they  came in. Nothing.
the only Dalek I saw was a walk-on during the SFX demo. Blink and you’d miss it.
In fact I did, and didn’t get a photo!

Bring back the Daleks!!!
Posted by Steven Ricks Tailoring at 21:53