Yesterday was a surprisingly smooth event. I got in on schedule and pretty much everything ran like clockwork throughout the day.

First on my schedule for today is the TARDIS tour. I elected to go early on Sunday morning to minimise it clashing with any of the main events.
There is a coach to take us to and from the studios, and I have an allocated place on the 8.15am departure, so I don’t need to rush down to the Millennium Centre like I did yesterday. The clocks go forward today as well, so by doing this tour it gives me a more relaxed start to my second day.

Well that was the original plan.

A few weeks before the event everyone had an email that the coach would leave at 8am rather than 8.15am, which was okay.
I got there in good time and the queue had already formed so I found the end and was quickly checked in by the waiting crew.

Time was ticking on and 8.15am was not far off. Looks like I didn't need to rush after all.

One of the crew came to apologise, as the bus was delayed due to road closures in connection with the Sports Relief Charity Mile, which starts and finishes right by the Cardiff Bay water tower.

8.30am and still no bus, but we were now asked to walk around the corner to meet the bus.

8.40am and in the distance we glimpse the bus. It can be seen two blocks away - being stopped by security who seem to be asking it to turnaround!

It takes a good 30 minutes to get to the Upper Boat Studios, which are some non-descript units of an industrial estate.
We are divided into two groups, to make our on set time more comfortable.

I'm in the red group - the second to get on set - so while we wait we have a coffee in the Blue Box Cafe, often seen on Doctor Who Confidential. It sounds glamorous, but it's more of a Welsh version of The Apprentice Bridge Cafe.

While I'm in there one of the tour guides, who are all Upper Boat staff, remarked on my tweed, noticing it was more accurate than most she had seen, which was flattering.

Finishing my tea it was finally time go on set!
We walk around to the main entrance, and down some corridors before turning into the studio. To a collective gasp we are confronted by the back of the set, constructed of wood and scaffolding, with a bright internal glow. 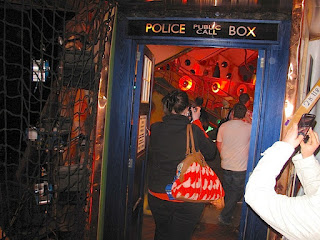 Around the side there is a series of ramps up to the TARDIS exterior doors, and following a quick briefing we were invited in. 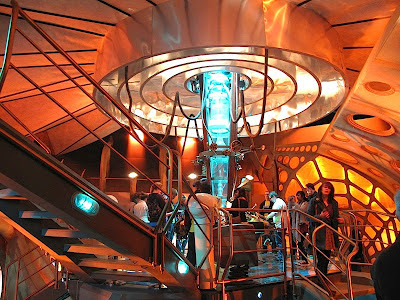 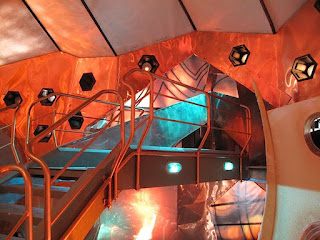 I mean, what else can you say?
It is a seriously amazing set. The shapes and lines; the colours and lighting; the space and levels - everything about is is stunning.
And it isn’t as big as you’d think. It’s apparently typical to work to a seven-eighths scale and I think this is no exception. That in combination of wide-angle lenses and clever camera views create a set of mammoth proportions.

The fact that parts of the set are plastic flower pots that can be picked up for £6 a piece doesn’t matter! 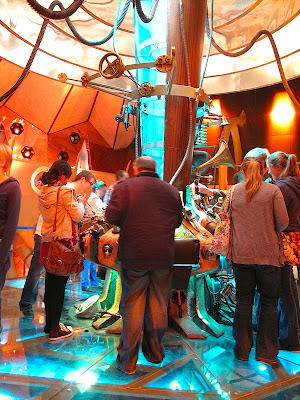 There were absolutely no restrictions on photography, and apart from the staircases and below decks, nowhere was out of bounds.
There was a flurry of hands grabbing for knobs and dials and before too long the coin-dropping sound off something falling off the console echoed the set! 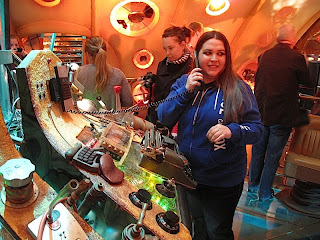 All heads turned to on of the crew, who piped up ‘Not to worry - Matt’s breaking it all the time!’ a big sigh, and everyone was back hands-on as before. 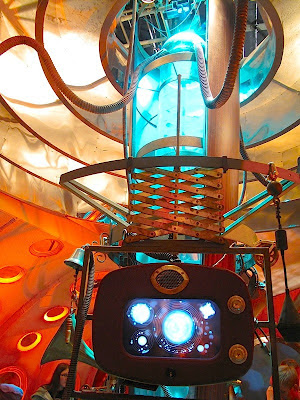 I took as many photos as I could, as well some 360 3D views. These worked okay, but with people moving around the software struggled to stitch certain bits together right.

Here’s the best one I took - still not perfect but pretty cool. 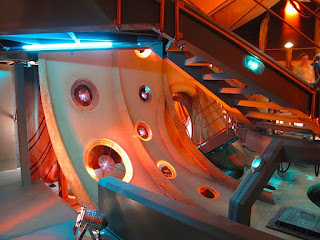 Being on my own I wondered how I’d get a picture of me on set. Luckily the tour guide who liked my tweed earlier was on hand and offered to take it for me. She took two shots, and incredibly managed to get it with no-one in view at the back.
Total respect to her! 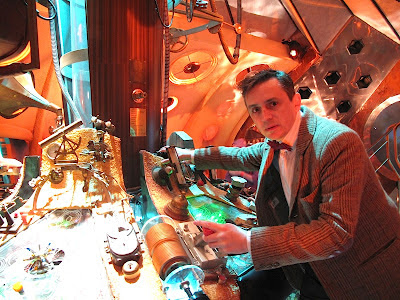 It reminds me of the shot I got with the original McGann console at Gallifrey One only last month - I seem to be starting a collection!


Now I puttee two images together, you can see how a lot of the style and design of the console owes a lot to the McGann version – a part of the classic series many Who fans prefer to forget or ignore.
Posted by Steven Ricks Tailoring at 10:30