Having given myself the luxury of a ticket for both the Saturday AND Sunday of the convention, it means I could focus on different things each day. 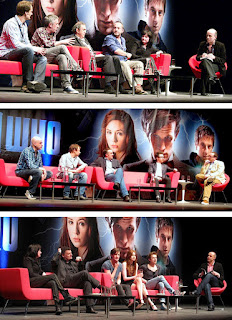 Yesterday I made the effort to be as close to the front as possible for the three panels, and got some great pictures in the process (see left).
I attended the SFX demo; prosthetic demo and Restoration Team lectures in the lobby, so by the end of the day I felt I had got my money’s worth there.

Today my focus is elsewhere, and although I will attend the panels again, I’m less concerned about being first through the door. 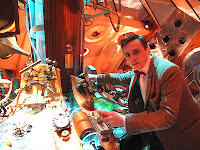 This morning I took the TARDIS set visit, which was seriously the coolest thing ever (see right). It topped anything that happened yesterday, and I can’t see much exceeding it today, but we’ll see.

We got back from Upper Boat in good time, and I joined the queue for the Meet The Stars panel. This time I was near the back, which was fine. The discussion was amazingly similar to yesterday, so I was able to soak up the atmosphere of the event. 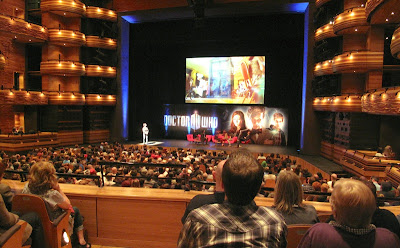 This view gives you some idea of the size and grander of the venue, as well as the size of the audience.

So today I decided I’d spend a lot more time autograph chasing. Later I’m due to meet Matt Smith for both photo and autograph, but in the meantime I’m after some of the other guests. 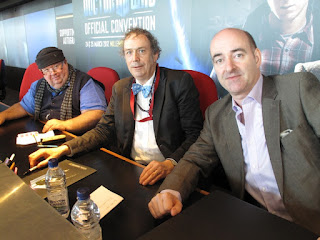 These were signing for free in the lobby, with a regular circulation of guest on offer.

I had a real nice chat with Nicholas Briggs, who I had previously seen at both Chicago TARDIS last November and again at Gallifrey One in February. I said how we have met more than once and tried not to sound like a stalker! 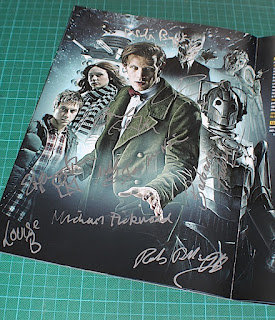 I managed to catch Ian McNiece, aka Winston Churchill; production designer Michael Pickwoad Nicholas Briggs, aka the voice of the Daleks etc (all in photo above); writer Tom MacRae; space suit maker Robert Allsopp; director of photography Stephan Pehrsson; Louise Bowden and Barbara Fadden, who had been Weeping Angels and  Handbots; and Mark Sheppard, aka Canton Everett Delaware III.

By skipping the SFX demo, I managed to get in the queue for my Matt Smith autograph early, and found myself to only be around 10th in line.
I had to wait a while, but there were lots of fellow fans to chat to to pass the time.

It just so happened the autograph session was staged in one of the areas seen in The Girl Who Waited.
If you look in the video below, you will see Matt, Karen and Arthur arriving through the doors Amy writes her lipstick message on.

They hit the ground running and it wasn't lone before I was called forward to meet the man himself.
We had all been given a reproduction page of script from the latest Christmas special, which I got him to sign with a black pen (see right), but I also wanted him to sign the cover of my event brochure with a special silver pen I had bought along. 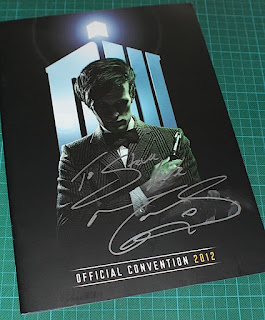 Matt was very obliging and signed as instructed!
(see left)
Duties completed, I shook his hand and as he withdrew, managed to brush the still wet signature, smudging it in the process! He is SO clumsy and my lasting memory as I left was seeing him trying to wipe the back of his hand of the silver residue from my cover. Bless.

I then spent some time in the lobby catching passing cosplayers for photos, before it was time to get in the next queue, this time for my Matt Smith photocall.

This was the final highlight of the weekend, and again I was nice and early finding myself third in the queue, however, my place slipped a bit as those who also wanted Karen’s photocall were allowed to jump to the front to give them time to get to both, which was fair enough.

I kept an eye open, and spotted the approaching entourage surrounding Matt . . .

I was really looking forward to this one, and when my time came he clocked my jacket, which I explained was from the same bolt of tweed that made his. I showed him my boots, which he immediately recognised. Asking if I had the right trousers I said “G Star RAW!” to which Matt replied “You’re the man with the costume, mate!”
A flash of camera, a handshake and a hug and it was all over. But I left with the satisfaction of knowing Matt had got it with my costume. My work was done and my weekend was over.

However there was one last surprise for me waiting outside the Millennium Centre . . .
Posted by Steven Ricks Tailoring at 17:38