As well as wanting to get to meet Matt Smith, there was one other Matt I was looking out for tho weekend – Matt Elliott.

“Who?”, I hear you ask. Well, he’s someone you’ll be seeing a bit more of in the future, as he is a dead ringer – or ganger – for Matt Smith.

The first I became aware of him was when a friend linked me to his Facebook page, and I saw some of his great pictures taken at the Waring House housing estate, as seen in Night Terrors.

He was photographed with Lisa Baxter, who you may recognise from the Entertainment Media Show I attended in October.
She was the superb Amy cosplayer, wearing the handbook armour from The Girl Who Waited.

Anyway, I had been wandering around all day Sunday and hadn’t spotted him, so stepped outside after the final event to get some air and maybe some exterior photos before the convention finally started to wind down.

THAT was when I spied Matt, not far from the Torchwood watertower.
I went over and introduced myself and he knew of my blog, being a regular reader.
he was with his girlfriend, her brother and Lisa, who was in one of her Amy outfits.

It didn’t take too much persuading to get them to pose for me, with the Millennium Centre as a background. We did a couple of shots of Amy and Matt together, before I got Amy to drop back a bit, giving some more dynamics to the composition.

My favourite image from this set-up is below. 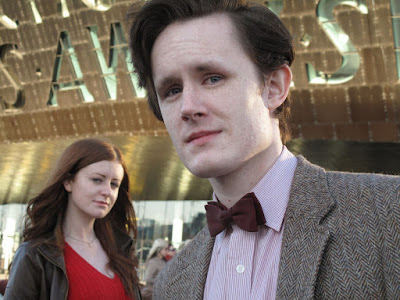 It wasn’t too long before we were joined by three other Amys and I rounded them up for a quick shot or two. They were all rather taken with Matt and his resemblance to the real Matt Smith, so they were very agreeable to forming part of a group pose.

I had liked the way setting Amy a few feet further back had created some depth to the picture, so I set about quickly directing the group into a V formation, with Matt at the front.

Once Matt settled into the shoot he relaxed a bit and we started to get some great shots.

I think the full formation of all five of them worked well, but I also cropped in for a few shots to show firstly the Amys to the left, and then those to the right.

These were taken around 6pm, so the sun was very low and shining right into my lens from the side of the Millennium Centre.

Given more time I would have relocated everyone a few feet to the left to frame things a bit better, but we were still getting some great shots and I didn’t want to try anyone’s patience.

Finally the obligatory sonic screwdriver came out and we did a few shots in a typical Matt Smith pose, Amys in tow.

All of these shots were done in the space of five, maybe ten minutes at most, but my favourite out of all of them is Matt with his gaggle of Amys, and I’ve quickly done a treatment on it in line with some of the BBC publicity stills.

I think it looks real cool! 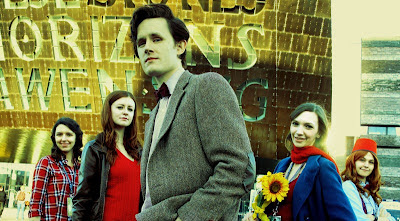 If you enjoyed these shots, why not take a look at Matt’s Facebook Page and add yourself to his followers? I’m sure he’ll appreciate it.

Thank you to Matt Elliott, Lisa Baxter, Harri Munro and the two other Amys – sorry I didn’t get your names – for posing for me and taking time to be part of this great shoot!

Posted by Steven Ricks Tailoring at 18:54