Visions From Behind The Sofa

It’s the 38th anniversary of the start of Doctor Who! 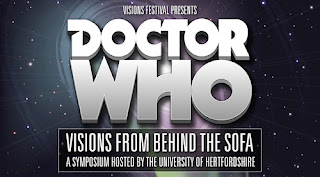 And to celebrate I went to a one-off special event at The University Of Hertfordshire, only a few miles north of where I live.

The university has a film studies department, and they regularly organise lecture days for their students to attend. Some of these are open to the public and his month was a Doctor Who day, the choice of scheduling date being no co-incidence.


Entitled Doctor Who: Visions From Behind The Sofa, it formed a serious study of the development and impact of Doctor Who through the years.
The campus is a very modern, and inspiring building. 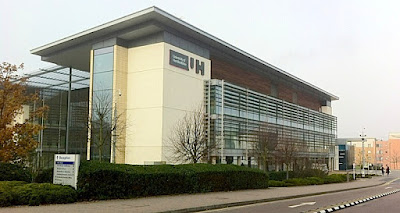 It didn’t take me too long to find the Weston Auditorium, where the day took place. I quickly realised I was not only probably the oldest person attending – everyone were either wearing skinny jeans hanging off their hips, or had be any hats on – I was the only one in costume.

I had just completed my best ever Matt Smith Closing Time costume, so I had to give it a test run.

Luckily before we went in I did spot someone wearing a Tom Baker scarf, so I didn’t feel quite so out of place. 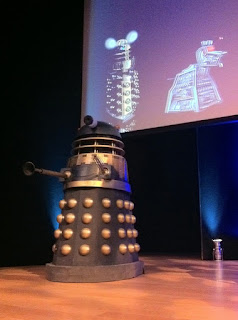 The venue was a cinema, with a stage in front of the screen. On stage was a classic series dalek to get us in the mood!

The day was hosted by Howard Berry, who is the Joint Programme Leader and Senior Lecturer in Post-Production for the undergraduate BA (Hons) degrees in Film and Television Documentary, Entertainment and Fiction at the University.

Although it was an all-day event, it only cost £5 to attend, so was an absolute bargain.

It was broken down into four main lectures, each followed by a panel discussion.

Mission To The Unknown

This looked at the origins of the classic series; its creation by committee; how it broke all the rules outlined by the powers that be at the BBC, and bucked the trend for programmes at the time.

The lecture was delivered by Howard, who then introduced the panel, who included Kevin Davies (director of More Than 30 Years In The TARDIS); Toby Hadoke; and Cameron K McEwan, who runs the BlogtorWho website. 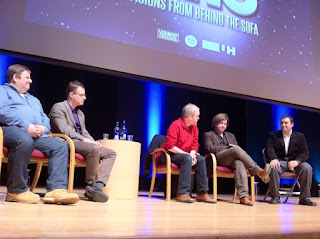 For me Toby was the star of the show for the discussions, as he was most animated and got some great points across in an amusing and engaging way.

The panel mused at length about their earliest memories of watching the series; from being dragged to Blackpool and issuing episode four of Hand Of Fear; to seeing The Sea Devils for the first time and seeing a schools programme on the making of it while off ill from school.

They also touched on the tricks memory can play on how we think we saw the episode first time around and how it really looks now. 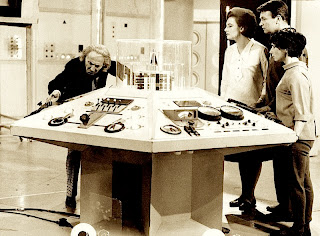 What particularly interested me was discussions about how the intentions for Doctor Who changed and morphed down the years. It was conceived as an educational programme, with The Doctor as an elderly authorities figure; Susan as the audience hook, as someone young viewers could relate to, but was made his Grand Daughter to avoid potential dodgy questions; the school teachers, one a history teacher the other a science teacher, who could explain and give background to what they saw and encountered. But as the series progressed these elements changed with the change of cast surrounding The Doctor, and finally The Doctor himself when William Hartnell left the role. 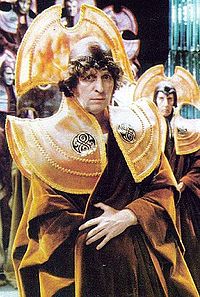 It would have been so easy for the BBC to just call it a day there, but they didn’t.
However, it would be 1969 before we knew The Doctor was a Time Lord; and 1973 before he had a home planet; 1974 his changing face had a name - regeneration; and 1976 we discovered this had a finite cycle.

Tony Hacoke talked a lot if sense with great wit about how we cannot look back at the classic episodes and compare to what we have today. He pointe out that Isaac Newton discovered gravity, but we know how to operate a microwave and he didn’t, but does that make us cleaver then him? No. You can’t compare classic-Who with new-Who.
The failing and rawness of the early black and white episodes was championed as their best points: the shaky camerawork, William Hartnell's fluffed lines, and Zarbi bumping into the cameras was all part of the magic.


The Girls Who Waited?

Originally entitled Smacked Bottoms To Cosmic Kisses, this looked at the gender roles within Doctor Who and the place the companion has in the programme.

Lorna Jowett, a lecturer at The University of Northampton discussed representation of gender. She touched on topics such as how the assistants are treated and portrayed in the series, and how in many ways this has changed down the years, with Rose and Donna being examples of more head-strong characters. 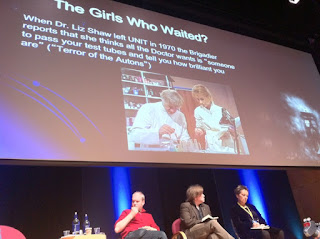 Earlier companions were treated with less respect, and were seen as someone who in the words of The Brig could “pass your test tubes and tell you how brilliant you are”.
Ironically the companion concerned, Liz Shaw, was later seen as being too much of an equal to The Doctor, and was dropped in favour of the sometimes bumbling Jo Grant.

The introduction in new-Who of companions with full back stories, families and even partners in tow, reflected the modern nature the show has now taken on.

It was an interesting point of view, which I noticed some panelists found a little intellectual for their little man-brains . . . . WAKE UP TOBY!!

I’m gonna get slaughtered, but I did detect some double standards when she bemoaned the role of the assistant as eye candy, but aluded to her own swooning on Louise Jamieson in her chamois leather bikini. 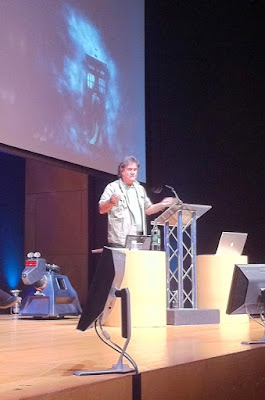 Next up was a little something special. Doing a guest spot was the ORIGINAL K-9, with his handler and driver, Matt Irvine.

Matt, a veteran of the BBC Special Effects department, took us through the history of the tin dog from Tony Harding’s original sketches through to the working prop.

We saw a slideshow of images from K-9’s time on the show, and Matt explained how he had been refitted and improved over the years, to where he now is. 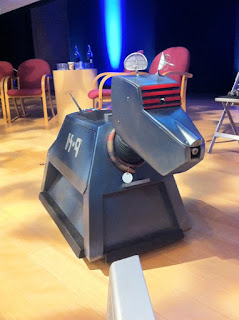 On the stage was the only officially surviving full version, which appeared at the end of School Reunion when The Doctor leaves the MkIV with Sarah Jane.

We broke for lunch and everyone had the chance to get a photo with the Dalek and K-9. Matt was very laid-back about letting people get close to K-9, which was real cool. 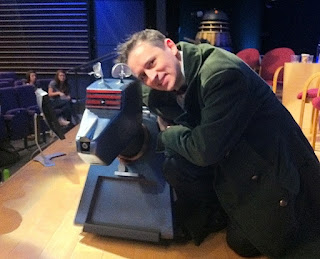 I couldn’t resist getting a photo myself, so got one of the college students to take it for me.

I can be such a geek!
After a break for lunch, we returned to hear the next lecture, but not before something very special. 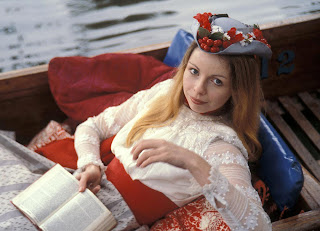 Shada, the final story of the 1979 season, was due to be a 6-part adventure written by legendary script editor Douglas Adams. But due to industrial action its production was substantial delayed and then finally cancelled. All of the recorded material for the story had been preserved and this is due for a DVD release next year, in a box set with More Than 30 Years In The TARDIS, the Kevin Davies documentary (more on that later). 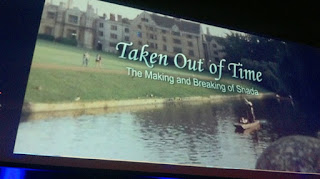 On the DVD with Shada will be its own making-of, and we got to see a special preview way before its release next year.

I won’t spoil any of it, but it was very good and pulled no punches about the chequered history of this iconic missing story.


The Edge Of Destruction

In this lecture the dark days of the cancellation of Doctor Who and the in-between years when the show was kept alive through the efforts of fans.

This was delivered by Ivan who recounted his own home-made Top Trumps cards, which he shared via a webcam. 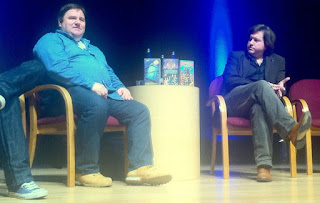 The discussion for this came alive with the including of Kevin Davies, who as a teenager had gotten in with Matt Irvine at BBC visual effect and had shone as an animator, producing the graphics for The Hitch Hikers Guide To The Galaxy.

He had later turned to directing and help bring a fan-made Doctor Who follow-up to fruition, in the form of Shakedown: Return Of The Sontarans.
It had been shot on a budget of £25,000 and employed a number of classic series actors playing new roles. The cast of Blakes 7 also helped fill the ranks. 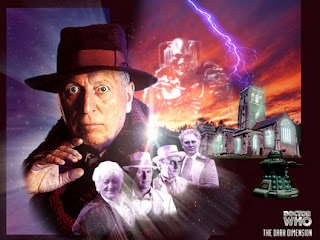 Following this he was offer the chance to either be effect supervisor on The Dark Dimension, a planned 30th anniversary revival to be shown on the BBC, OR direct a documentary to be called 30 Years In The TARDIS. Sadly with the abandonment of The Dark Dimension the decision was made for him, and he went on to make one of the most influential and inventive documentaries made on the series.


The Greatest Show In The Galaxy

Now firmly back on our screens, this lecture looked at the rise of new-Who and the future of Doctor Who.

This was delivered by BlogtorWho website administrator Cameron K McEwan. 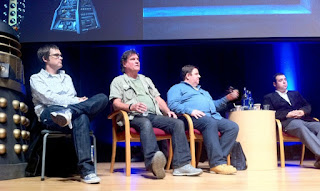 He discussed the rise of New-Who and how it had been reborn for a new generation. Concern was raised about the complexity of the latest series and the wiseness of the decision to split the season in two.

Consensus was that we all loved it anyway – so that’s alright! 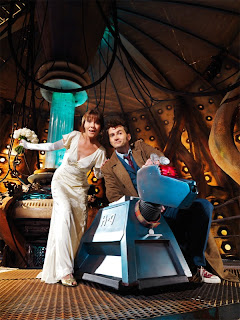 Matt recounted a story of his involvement with Journey’s End, where he was K-9 wrangler on the Sarah Jane set, with Graeme Harper directing.
They were sat on the steps of Sarah’s attic and reminisced about multi-camera filming, compared to the slower paced single-camera work that is done today. All of the crew were younger than them and it was going over their heads. The young of today . . ..
Looking back I can’t believe this ENTIRE day cost me the merge sum of £5! Well worth the effort of going.

Email ThisBlogThis!Share to TwitterShare to FacebookShare to Pinterest
Labels: Events