Earlier this year, on the spur of the moment, I followed the Ultimate Tennant Suit across the Atlantic to Gallifrey One, North America’s premier Doctor Who convention.

Well I guess I got a taste for conventions-American style, cos I’m off again - this time to Chicago TARDIS, a Mid-West and more low key affair.

Last time I left it to literally the last minute and gabbed a flight which got me there after the convention started. This time I'm heading out the day before and coming back the day after its all over. A more leisurely, and civilised way to do things.

The headline guest, until a few weeks prior, was Alex Kingston, who had to drop out after getting a part in the BBC’s revival series of Upstairs Downstairs. 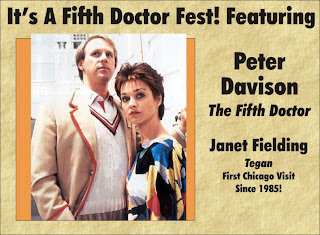 Instead it is a Fifth Doctor FEST, with Peter Davison, and Janet Fielding (who’s always game for a laugh) AND Sarah Sutton. It’s a shame that Matthew Waterhouse isn’t there too, but is still means the complete post-Earthshock TARDIS crew will be reunited - which will be fun. 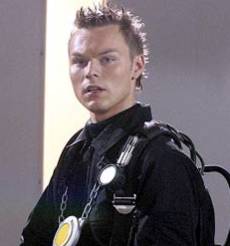 There are other guest, including father and son W Morgan Sheppard and Mark Sheppard, as well as Nicholas Briggs and Andrew Hayden-Smith. The latter just happens to be sitting precisely four seats in front of me on the plane over while I am writing this entry!

Earlier this week I was a bit worried about the flight, as their had been a lot of fog swirling around Heathrow, and thousands of passengers had been left stranded. Luckily all this had cleared by Thursday and we took off on time, and actually arrived a few minutes ahead of schedule.

A good start to what I’m hoping will be a great weekend, although when I got to the hotel I found that Sarah Sutton had to drop out due to family issues, which is a great shame.

Still, I’m sure Janet can handle Peter on her own!
Posted by Steven Ricks Tailoring at 16:08