Conventions are cool! (Or are they?)

So this morning was the release of the tickets to the OFFICIAL Doctor Who convention due to be held in March 2012 at the Cardiff Millennium Centre.

Just like the stampeed for the BBC Prom tickets last year, I was waiting - poised - to get my order in.

Prior to the release, the BOOK TICKETS page simply read:


Tickets will go on sale 9am Monday 14th November.

This was in-between the occasional Server Connection Failure and my browser not even being able to connect to the host domain.

It wasn’t until 10.30am that suddenly I go the connection needed and I was in. AT LAST!

Before the release of the tickets, information was a bit sparse about exactly what would be going on and how it would play out - sure it said Matt Smith and Steven Moffat were the main guests, and we could get photo opportunities and autograph sessions with each and that these had to be paid for in advance when ordering tickets – but the exact details were not really laid out in total clarity. 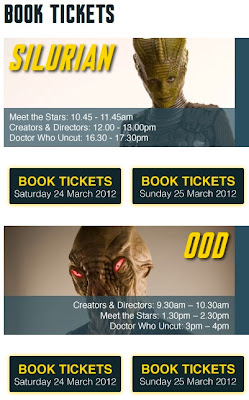 The booking page finally revealed the hideous reality of the structure for the event.
Although it is over two days, both days are due to be identical, so the site openly encourages you to only book for ONE day. Fair enough - especially since a ticket for one day is £99!

The programme for the day consists of Meet The Stars, Creators & Directors and Doctor Who Uncut. Some of these play in parallel, and you choose to follow one running order or the other, known as Silurian or Ood tickets. Again, fair enough. 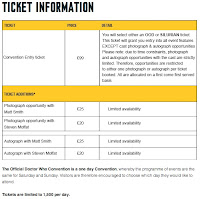 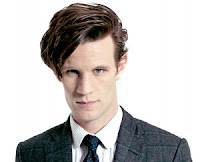 Since I was booking nice and early, all four options were still available, so it was down to choosing between Matt Smith or Steven Moffat – sorry Steven, you got the same name as me, but it’s a no-brainer there.

It was then down to autograph or photograph. OR buy a second day pass (at £99) so I can get both. 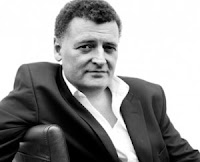 At that point it becomes a swizz. It’s Daddy or chips. Your favourite thing or the best thing ever. Which do you choose?
It’s not unreasonable to ask for both, if not all. Since you are paying through the nose to just get through the door, I would want to tick all my boxes and say, yes, I WENT to that event and have everything to prove it.
There will be other guests there, for which you will no doubt have to pay for autographs, so the whole thing is rapidly adding up to an expensive weekend.

So come on BBC – impress me!
Posted by Steven Ricks Tailoring at 20:47