Having landed safely and on time yesterday afternoon, I am now refreshed after being awake for 25-hours straight and ready for what the convention has to throw at me.
After a hearty breakfast of poached eggs, I spent some time catching up on blogging from the hotel lobby. 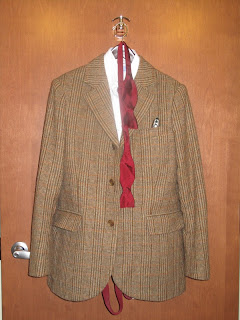 I really like wearing the Shetland tweed these days, so to start the day off I wore it with my Utah shirt (see right).

Slowly the hotel came to life, with more attendees, fezzes and stetsons evident.

There were some great improvised costumes around, and I especially liked a group who were doing the Fifth Doctor TARDIS crew (see below). 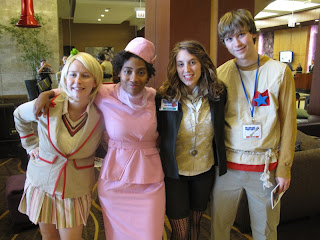 There is a lot of new-Who cosplay (see below), so it’s refreshing to see some classic series costumes for a change, and even more so if they are worn by younger fans, proving the older episodes haven’t lost any of their appeal. 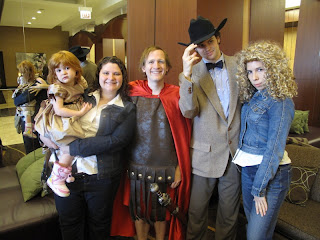 Chicago TARDIS is nowhere near as big as Gallifrey One, with only around 800 people due to come this weekend.
It is, however, well organised and put together with the experience of the fans in mind.

This morning I went through the process of getting my photocall with the principle guests: Janet Fielding, Andrew Hayden-Smith and Peter Davison. 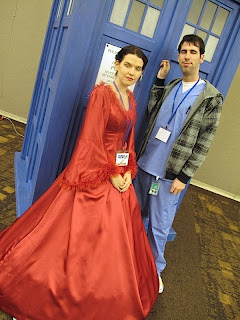 I have a reserved ticket for the weekend, which gets me a place in the queue just after the All-Access attendees, but before the standard ticket holders.

To minimise the standing in line queuing time, we are sat in a holding room until they queue is ready to start moving. We are than called and queue up in the order of our ticket numbers. It’s a simple but effective means of line management, without everyone having to stand around for hours on end. 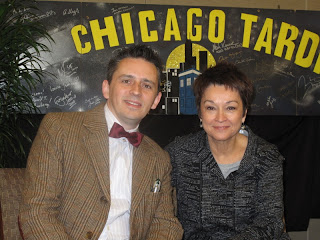 First up was Janet.
When I walked over to sit with her, she recognised me from the night before and said “Oh, it’s the pom!”
Pom is an affectionate derogatory term Australians use to refer to UK residents.

What I do like about these photocalls over the other I have done is as well as having a professional photographer taking your picture, for a few dollars extra they will take a second shot with your own camera.Wonderful as the in-your-hand pictures can be, because they are printed at great speed they are often of poor quality with an unattractive colour cast over them. (That said, the prints I received here were a lot better than others I have had, so top marks to the organisers there). 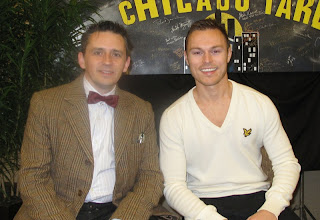 Next was the chance to get Andrew Hayden-Smith. I don’t think he has done many of these events yet, but he was very courteous and friendly. I have sometimes detected a slightly cautious reaction by some guest to fans as they approach, but Andrew was all smiles and has embraced the whole convention experience.

Finally for today was Peter. For him I felt a costume change was in order! 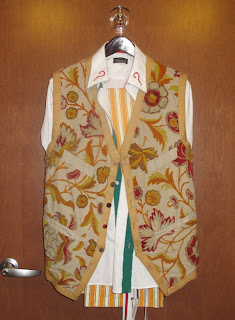 Knowing Peter was the headline guest, I had to bring the Planet Of Fire waistcoat along, which I wore with a shirt from a group buy from Gallifrey Base and a pair of my Five Trousers, season 21 pattern.

Standing in line a got a lot of comments about my costume, and some dropped jaws when I told them it was the screen-used costume.

I wasn’t sure if Peter would twig why I was wearing, but I could see him looking at me with a quizzical eye. I explained this was his original waistcoat, and he acknowledged it, but said he didn’t specifically remember it that closely. 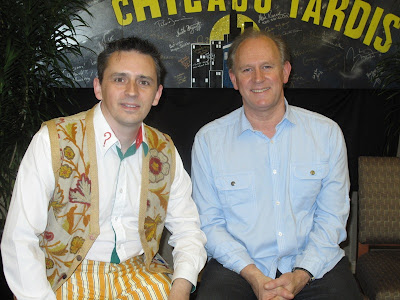 Bit disappointing, but I guess you can’t expect him to be a walking encyclopaedia of his costumes. 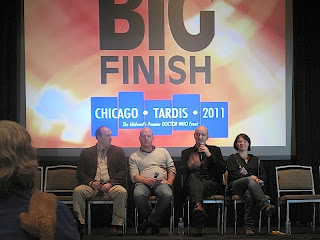 Following the photocalls I went to the main conference room, where Big Finish were giving a Q&A session on the audio adventures past, present and future.

Taking the lead was Nicholas Briggs, the voice of the Daleks and Cybermen on the new-Who.

Next up was Peter Davison’s Q&A, or interrogation as I like to think of it.
He’s a brave man to sit alone on a stage in front of a few hundred people with a seemingly never ending line of inquisitors waiting to ask their questions from the microphone in front of him. 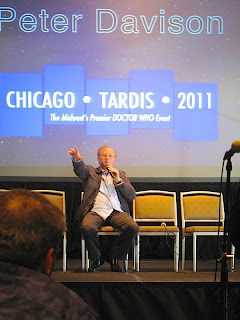 He showed great wit with his answers, and I could see a number of people in the audience prompting or leading him towards some of his well trodden tales of ribbing Matthew Waterhouse or Nicola Bryant’s cleavage!

After lunch I was reunited with an old friend – The Ultimate Tennant Suit, and it’s owner, Kevin Coppa!!

I knew Kevin was coming this weekend, and after scaring the life out of him by turning up at Gallifrey, I gave him some warning this time of my attendance.

After he got settled in he was soon out and about in his full Ten costume, attracting attention everywhere he went.

It was good to catch up with him again – but it was difficult to hold any long running conversation due to the interruptions for photocalls, which I could never begrudge. I had contributes to his look after all. 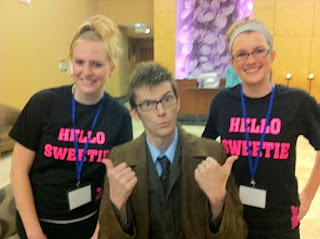 He shows enormous patience with everyone who wants their picture with him, and gives a different iconic-style pose for each. 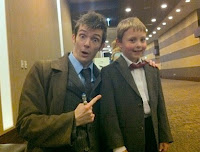 There are a number of kids at the convention this weekend, and they all flock to him and their eyes light up.

No-one more so than a kid in a wheelchair, who’s excitement at being with The Doctor brought a lump to my throat. 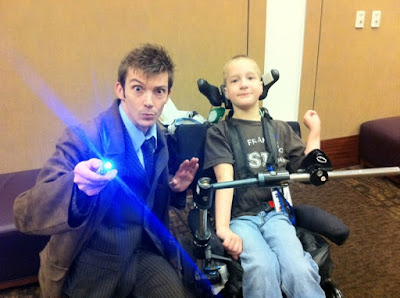 It was a special moment that makes events like this worth more than anything you can put on a video screen or have in an autograph on a DVD cover. 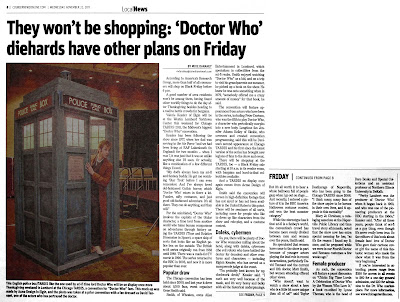 Posted by Steven Ricks Tailoring at 23:38