This evening things unofficially kicked off with a complimentary meal for the reserve ticket holders, attended by the guests that had arrived by that time.

I have brought along over six costume changes for the weekend, and I plan to rotate them as often as possible. Each time I do I’ll let you know what I'm wearing! 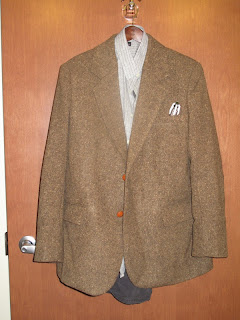 For the meet and greet, I decided to wear my series five Donegal tweed jacket and blue Paul Smith shirt (see right). It’s comfortable and I only got to finished it off in the last week, so this is my chance to wear it for the first time proper.

There was a warm round of applause as Peter Davison and Janet Fielding came in, followed by Nicholas, Andrew and others. 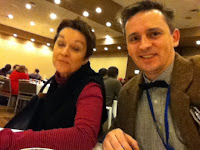 They were very cordial and made the point of table-hopping around the room to meet and greet everyone there.

Janet was complaining about her Thanksgiving Dinner, which included sweet potato cooked with marshmallow. Peter on the other hand had a glass of wine, which was agreeing with him . . .

I had a good chat to a number of fellow attendees who had been coming to the event for several years. It had been a while since Janet had come over, so I filled them in my my experiences of her style and patter.

Like me, they are looking forward to the weekend’s events.
Posted by Steven Ricks Tailoring at 22:16