Doctor Who On Ice - the hype

Last night saw the first performance of the Doctor Who Live show.
It premiered at the Wembley Arena, before touring the country, taking in nine cities in four weeks!

I’m going tonight and am really looking forward to seeing what it’s all about.

To drum up some interest, there has been a flurry of press and media activity, with Matt Smith doing a live interview for Sky News.

The local London rag, The London Evening Standard, is no exception, with a preview in the newspaper (see left, click to enlarge and read), and a ful interview with Matt in it’s Friday colour magazine, ES Mag. 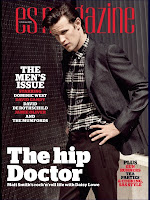 The interview was an interesting read, covering subjects ranging from his romance with girlfriend Daisy Lowe; to the Doctor Who Christmas special, and a revealing confession on his fandom of Michael Gambon; and the upcoming Christopher And His Kind.
The article is accompanied by a number of fashion shots specially for the magazine. In it he wears labels ranging from Gucci and Prada (a £990 jacket), to Ray-Ban and Dolce & Gabbana (a £258 shirt), and the inevitable Paul Smith (a £865 suit). 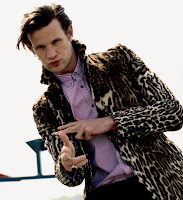 Let’s hope he doesn’t wear that in the new series!

I have a couple of spare copies of the ES Magazine. If you want to get one, drop me an email to tennantcoat@me.com

Posted by Steven Ricks Tailoring at 10:39