With the Paul Smith shirts at long last in stock, I obviously now want to get myself one. 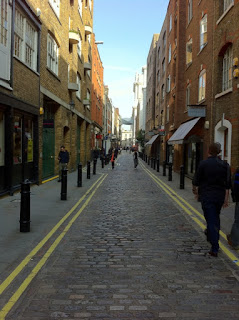 When I got mine first time round, I wanted an XL, but annoyingly they were sold out, so I had to buy an XXL. As it happened, the shirt was a very slim, tailored fit, and the XXL fitted me fine.

This time round I thought I should get the same, but despite going online on the first day they were available, the XXLs were sold out.

I had heard that the Floral Street branch in London’s Covent Garden (see above) was due to be the only retail outlet for the shirts, so I went down then to take a look. 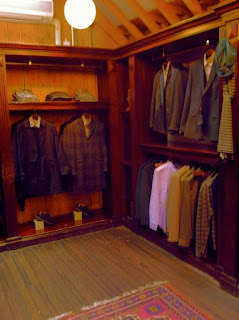 The shop is designed as a bit of a retro throw-back to a traditional gentleman’s outfitters (see left) with lots of dark wood and old fashioned rugs on the floor.

It took a bit of hunting around past the suits, jackets, formal shirts and jumpers, but hidden at the back of the shop, on a bottom rack, I could see a familiar striped cuff . . .
can you spot it? !

All that was left were two sized Large (see right), which would probably be a bit too snug on me.
Speaking to one of the assistants, I was told that an XXL could be ordered in for me, which as a relief.

The shop assistant also insisted on showing me a lightweight jacket in a tweed fabric, telling me this was the jacket Matt Smith also wore in the series.

I could blatantly see it wasn’t. Apart from being the wrong fabric, way too thin, the cut was wrong and it had patch pockets on the outside, not the welted with flaps as seen.

This is the same jacket that is listed alongside the shirt online, along with the £65 bow tie. It did feel like an opportunist piece of cross marketing – especially at £325.00!

It was a few days before I heard back, and it wasn’t entirely good news. Apparently, although listing the size, no shirts had been made to the XXL pattern, so I was chasing shadows.

Returning to the online shop, I found that only the Small and the XL were left in stock! So I hastily ordered an XL.