Death Of The Doctor - BFI preview 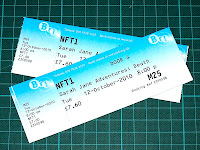 It’s only been a couple of days since I went to the Doctor Who Live show, but last night I was at the BFI South Bank to see a preview of the Death Of The Doctor episode of The Sarah Jane Adventures.


Bearing in mind I have written this a couple of weeks prior to its broadcast, I am going to keep this review of my night out as SPOILER FREE as I can.

I don’t want to spoil the enjoyment of the episodes for anyone.

The series had started on Monday, and we were shown episodes 5 and 6, not due to be screened for a good couple of weeks.

We had a nightmare driving into town, and what was due to be a 30 minute trip turned in to an hour and a half. Luckily we had allowed loads of time, so we arrived with literally minutes to spare. It was due to start at 8pm, but we found the preceding item had over-run, so when we arrived the audience was only just starting to go in. That was close.

I can remember coming here in 1983 for a fantastic season of classic episodes from the series. That was pre-video days, so it was a Mecca for fans to get the chance to see some of the stories that had watched on their first run, or to get the chance to enjoy them for the first time ever.

The local area was also the location for scenes in Frontier In Space.

Once everyone was settled in, Justin Johnson the host for the evening, introduced himself and to get us all in the right frame of mind, two clips were played.
First was the closing scene of The Green Death, with the departure of Jo Grant (see right); followed by a similar scene from The Hand Of Fear, with the departure of Sarah Jane Smith (see below).

It was amusing to hear a Cardiff reference in the dialogue.
Seeing the clips also highlighted that Sarah returned home to South Croydon in The Hand Of Fear, but she has since moved to Ealing for The Sarah Jane Adventures. 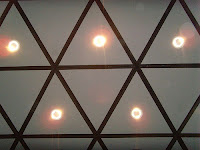 Looking around the auditorium, I was struck by the structure of the ceiling (see left), which was very reminiscent of some of the sets from Doctor Who in the late 1970s and early 1980s.

There was also an impromptu quiz, with four questions and prizes to match. For those who knew Sarah Jane’s home address (including postcode); the title of the last episode from this series; or the name of the character played by Russ Abbot they could win a signed postcard of Sarah Jane and Jo Grant, or promo material from Merlin. Still, as the host suggested, think of the word “eBay” . . .

Now it was time for the episodes, and the lights dimmed. The story had been specially edited into a single part for this screening, so we were seeing a double exclusive. The latest series of Sarah Jane as been shot in HD, and you could see the difference and quality of the image as a result. Less could be said of the sound, which was an appalling mix. The music and effects were way too loud and the dialogue track was barely audible. For the more exciting scenes we just had to guess what was being said.

This was a particular shame, as there was one line of dialogue that has been picked up by the national press that I think a lot of the audience simply missed.
It relates to The Doctor’s regeneration cycle, and when asked he did not reply with the usual “twelve”.
I’ll leave you to find out what he said when it is screened, but you can read about it here:

The Guardian: Doctor Who is now immortal, reveals the BBC
Anyways, the plot was the usual Sarah Jane fare – lots of running around and saving the world. The involvement of The Doctor and Matt Smith was certainly a highlight, as was also Katy Manning as Jo Jones (nee Grant). 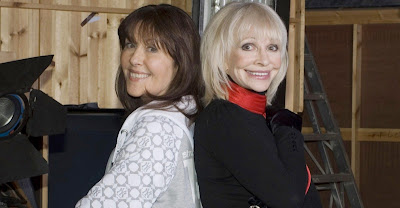 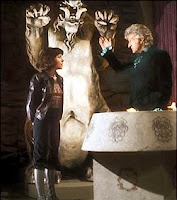 For the fanboys, there was LOTS of references to the classic series. A key part of the plot centered around memories, which was a cue for endless flash-frame clips to keep everyone happy. There was also lots of verbal references too. One I did like reminded me of Sarah Jane’s meeting with Rose where they boasted about meeting the creator of the Daleks or the Emperor. This time it was Peladon, a planet both assistants had visited with The Doctor in their travels.

Once the episodes were over, the stage was quickly reset ready for the panel discussion, made up of: Elisabeth Sladen (Sarah Jane Smith), Katy Manning (Jo Grant), Joseph Lidster (Writer, standing in for Producer Brian Minchin who had been taken ill), Gary Russell (Script Editor) and Edward Russell (Brand Manager). 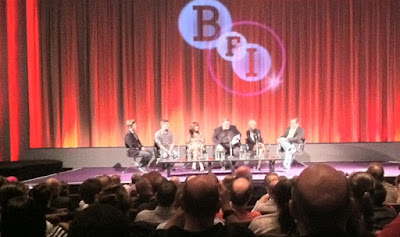 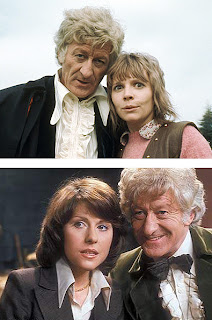 It was quite a lively discussion, with Katy quickly dominating the proceedings. She could be very naughty with shameless innuendo. Her comments about Daniel Anthony (who plays Clyde) being far from a young, 16 year old boy (he is actually 23) were totally twisted the wrong way!

Katy maybe 60, but she was very glamourously dressed, with a very revealing short skirt. She recalled her diverse career, her time in Australia and how she came to be asked to do Sarah Jane Adventures. Apparently it was so top secret she wasn’t told that she was appearing in it - even her agent couldn’t tell her!
I think she had learnt a lot from Jon when it comes to story telling!

Lis recalled that it was in NFT1, where we all were, was the last place she met Jon Pertwee. She later spoke to him on the phone, just prior to him going to a US convention. He died in Connecticut.

She also recalled her call to appear in School Reunion, a part she initially planned to turn down, however, a pleasant meal out with Russell T Davies and Phil Collinson, plus some free flowing wine helped change her mind.

Lis and Katy were both united in their praise and admiration for both Russell T Davies and Barry Letts, both of whom they saw as pivotal at key stages of Doctor Who’s history. Both their characters had been outlined and cast by Barry, and the ethos of his era still permeated the stories seen today, such as the Silurians in Cold Blood and Carnival Of Monsters being the back story to the Doctor Who Live show currently running.

We were seated near the back of the auditorium, but I gather form those much close to the front, Lis Sladen was not impressed with Katy’s antics. Oh dear.

Nonetheless, I throughly enjoyed her stories and she was enormous entertainment and was a highlight of the night.

Posted by Steven Ricks Tailoring at 12:59