Great news has finally been confirmed for those wanting a Paul Smith PS shirt identical to the one worn by the Eleventh Doctor.

Paul Smith announced this week that the shirt has been brought back by popular demand and will be available via their Internet store and in the Floral Street branch in London's Covent Garden.

There had been number of versions of the shirt discovered over the past year, none of which were 100% right. Some had the right fitting, but lacked the striped cuffs; others had the cuffs, but had concealed buttonstands; and another had the right butonstand, fitting and style, but had French style double cuffs, though striped.

There has been a photograph issued of the shirt, and it looks perfect in every regard. It has the right cuffs; visible buttons; looks to be a tailored fit; and does not have a breast pocket, that appeared on a couple of the version of the shirts found. 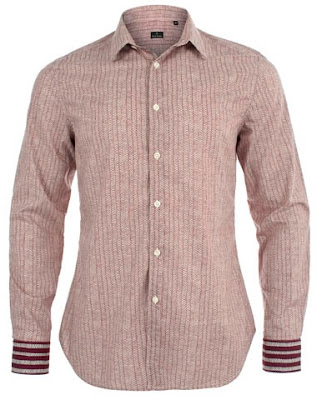 The shirt will be on sale from mid October 2010, and it is not known how long they will be available for, or what quantities have been made, but it has been described as Limited Edition – so grab one quick when you get the chance.
The shirts are to be priced at £119.

To find it quicker, the shirt has the item code PCXD/164H/WHO-P, and it should be findable with that code.

I will post a direct link to the shirt once it appears online.

Posted by Steven Ricks Tailoring at 09:42