The Greatest Show In The Galaxy...? 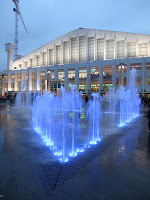 It’s Saturday night, and I’ve just got back in from seeing the Doctor Who Live Show.

It was at the Wembley Arena (see right), which thankfully is only 30 minutes drive from where I am. We hit a bit of traffic, but we got there pretty much in time.
Parking was £22, which for only a couple of hours is a rip-off - but where are you gonna park, if you don’t know the area?

Arriving, I thought I might be the only person in costume (I was as Matt Smith) but I did quickly spot a young lad dressed in a blue Tennant Suit.
We walked toward the Arena, and paused by the fountains at the front. Then suddenly I was aware that the very same kid in his suit was standing in the middle of the fountains! He had slipped in during a lull in their light show. By the time the next lull came, and he ran out to his waiting, and slightly annoyed mother, he was drenched!

There are five entrances (I think) to the arena, and we had to go in through the south west corner. Each entrance had its own long and snaking queue.
Then get my surprise when I found that standing behind me in the queue were two guys who had been sitting in front of me in the same box at the Sunday performance of the Doctor Who Prom concert! He recognised me, though noted I was as Tennant previously.
Small world!

Inside, the venue is impressive, and was quickly filling with people.
There was the odd curiously empty blocks of seats (not the totally empty section, second from the end, in the photo above). 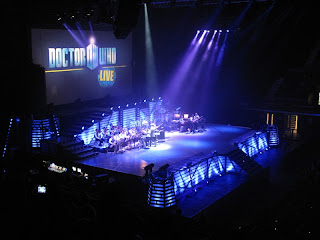 The show started 15 minutes late, but kicked off to a good start.
On stage was a small orchestra, conducted and lead by Ben Foster himself. 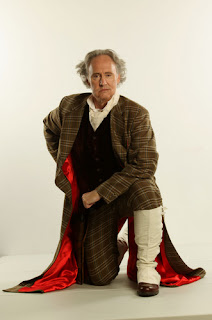 Ben is the arranger for the Doctor Who music, and composed all the incidental music for Torchwood. He also conducted all the Doctor Who sections of the Proms in 2008 and 2010. I thought it disappointing that more was not made of this.

Nigel Planer came on stage in his role as Vorgenson (see right), who it emerges is the son of Vorg, a character from the classic 1973 Jon Pertwee story, Carnival Of Monsters. 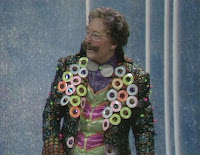 The premise of that story was of a travelling showman, played by Leslie Dwyer (probably best known for his role as Mr Partridge in BBC sitcom Hi-de-Hi!) who has a Miniscope, in which he keeps miniaturized monsters for the amusement of his audience.
Obviously things go wrong and only The Doctor can save the day.

This time round the Miniscope is an excuse to have as many new series monsters on the loose as possible, with Judoon, Silurians, Scarecrows, Clockwork Robots, Vampires and Cybermen all putting in an early appearance. 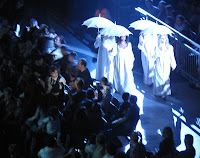 Anyone who had been to or seen the Proms concerts will already know the drill: the characters march up and down the aisles, scaring a few children as they go, but not causing too much disruption to speak of.

Anyone who had been to or seen the Proms concerts will already know the drill: the characters march up and down the aisles, scaring a few children as they go, but not causing too much disruption to speak of.

The same was done here, though the Jhdoon and the Cybermen also confronted plats nine audience, who they accosted, and in the case of the Cybermen, upgraded to full cyber status, which was a new spin on proceedings. 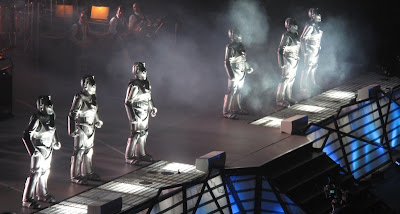 The Cybermen voices were as usual provided by Nicholas Briggs, who was also on hand to play Winston Churchhill, which was unusual casting, though he handled it pretty well.

A well staged scene involved some police offices arriving at the back of the hall, to which the auditorium lights went up, as if the events were cancelled. 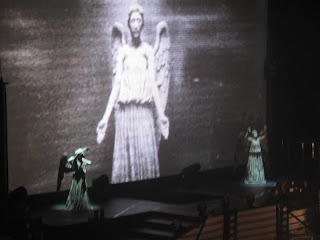 On stage, two Weeping Angles had miraculously appeared, and it was towards them the police foolishly went.

A sudden blinding explosion of light masked the officer’s disappearances, and the movements of the Angels.
This worked well and was a highlight for me as I've always felt the Proms producers never knew what to do with the Weeping Angles, so it was nice to see them deployed as they should. 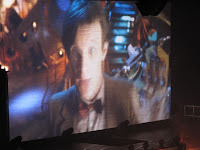 The arrival of Winston lead to the first of the vice link-up appearances by Matt Smith from the TARDIS set (see left).
the inserts were well timed and the interaction with the actors worked well.

Inevitably all this lead to The Doctors imprisonment in the Miniscope (see right) - cue more video based inserts - from where Matt enlisted the help of the audience with his hoped release later in the evening.

The Doctor's desparate pleas went unheeded, and it soon transpires that the advanced technology behind the Miniscope was not Vorgenson’s creation, as he claimed, but planted by the Daleks! Didn’t see THAT coming.....

Their arrival on stage provoked the biggest response form the crowd, and it was cool to see the Daleks trundling en-mass around promising merry hell as they went.
Only the white Dalek had been at the Proms, so seeing a near complete set (the white one was strangely missing) was great.

Time for another Matt Smith appearance, this time in a clever way. To the left of the big screen was a police box sized object, which until now had been kept dark. It suddenly burst into life, revealing it to be made of video screens. 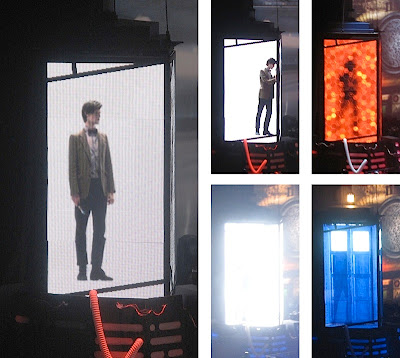 On this was The Doctor, made to look as though he was inside the box, the interaction of which was again well timed. It was almost like he was in the room with us! 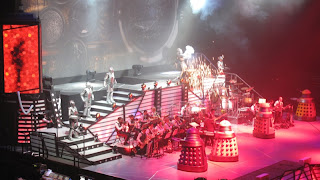 Anyway, it’s not long before the Cybermen show up again and a mock battle ensues, with explosions and one Cyberman taking a hit square in the chest-plate.

After putting pay to the warring Daleks and Cybermen, the missing white Dalek magically materialized, floating above the stage, making empty threats and pointless accusations at The Doctor.
The audience had been primed to shout ‘Geronimo!’ at a give cue by The Doctor, and now was the moment, firing the TARDIS up remotely and putting sorting out the rambling Dalek in the process.
The day was saved - and at last, after two and a half hours, we could all go home.

I say it like that, cos for me it was a bit over long, and occasionally dull. Nigel Planer’s dialogue delivery felt like he was waiting for someone to pick up their cue and he was holding for something to happen, which most of the time rarely did.
Having been to all three Doctor Who Proms, the novelty of Ood striding up and down aisles has worn a little thin, as they don’t do much more than that: walk up and down.
The effects were okay, and a number of the set pieces worked well. Nonetheless, it was a good night out and I’m sure lots of people will enjoy it at the various venues up and down the country in the coming month.


Are YOU going to see Doctor Who Live? Are you going in costume?
If so, drop me a line – it would be great to assemble a gallery of fellow cosplayers at the other tour dates.
Email me at tennantcoat@me.com
with some of your pictures, and I can add you to my gallery.

Posted by Steven Ricks Tailoring at 16:04

Email ThisBlogThis!Share to TwitterShare to FacebookShare to Pinterest
Labels: Doctor Who LIVE