One of my readers who often comments in my blogs recently raised an interesting question, and one which got my thinking.

benjamin rudman said...
Curious question Mr Steve; Are you finding the 11th Doctor’s clothing easier to replicate, in say, comparison to something such as the 10th Doctor’s coat?

I’ve noticed he has a lot of things that you’re able to jump right on, whereas Tennant’s coat was evil in the details.

The simple answer to this is a resounding yes, and for a multitude of reasons, sone of which I don’t think are immediately apparent.

The best way to get my thoughts across is to work backwards. 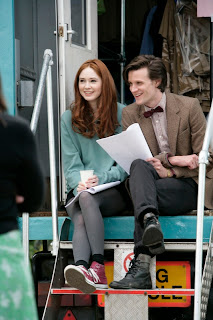 We first got a glimpse of Matt Smith in costume in July 2009, when an official publicity still was released just prior to the first location filming for series five (see right).
With shooting due to start in such a public place, I guess the BBC thought the fans and press would inevitably get photos. These would be around the net like wildfire, so it would be better to manage the release of The Doctor’s new look in their own, controlled way.

What they did give us though was a high res ‘pack shot’ containing the best reference to the fabrics of his costume and it wasn’t long before the Paul Smith shirt was spotted; the TopMan jeans were identified; and those All Saints boots was snapped up. All of these were in the twilight of their life on the high street, so time was of the essence. Within weeks stocks were pretty much gone.

Now think back and contrast this to late 2005.

Easter that year had already seen The Doctor’s return to our screens after a gap nine years. Although popular, it had not been heralded by the frenzy of interest seen these days. The modern fan base simply wasn’t there yet. It was seen more as a curiosity: would it succeed? Would it live up to expectation? I can remember a piece on The Media Show which took the down-beat tone ‘had Doctor Who had its day? Was it worth bringing back?’

Christopher Eccelston’s costume was iconic (in a way) but bland in its constituent parts: black jeans; workman boots; cotton jumper; and a leather jacket of unconventional origin (see left). It was an overall look that could be quickly achieved, but you had to know what you were looking at.

But as quickly as we had got to know him, he was gone. 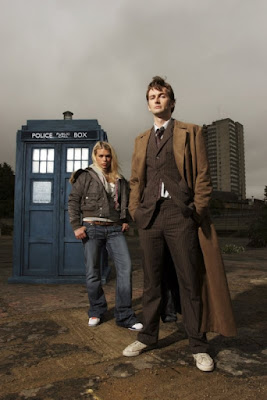 By the time we had the idea of dressing as The Doctor there was a new pretender on the block - David Tennant. He was just wearing a shabby suit, coat and trainers (see right).

I think it took a few episodes in 2006 for him to prove his worth, but David Tennant soon got his Converse All Star’d toes under the console and the fan community embraced him as their own.

What would have happened if a Matt Smith-styled high res image had been circulated in July 2005 (when filming on The Christmas Invasion started) and somebody piped up ‘I don’t know about the suit, but GAP have trousers in a really similar fabric’. Things would have been VERY different.

But we came in after the film had started so to speak. By the time he was THE Doctor, we are looking at Summer 2006, and the GAP trousers had been part of the Summer 2005 range, some two seasons prior, so long discontinued.

The fabrics used for for Ten’s and Eleven’s costumes are a stark contrast to each other.

Ten’s suit were made from GAP trousers (see above), whereas Eleven’s jackets are made from traditional and documented fabrics, by from historic weavers who could reweave at source if asked (see right). 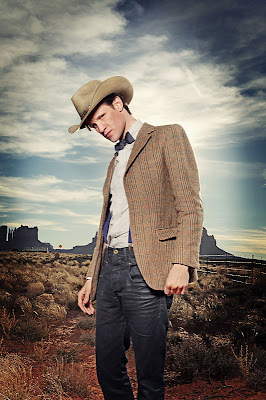 Although Matt started off wearing a majority of off-the-peg items, the balance has now distinctly swung towards bespoke-made garments, such as the tweed jacket and the green Greatcoat.
This has to be in part due to a new costume designer, Barbara Kidd, being in charge.

The G-Star RAW jeans seem to have a longer shelf life, as you can still get them as of today (though probably not for much longer). 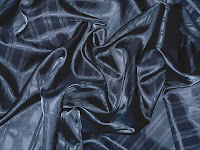 The linings for all of these have been plain colours, so are matchable, unlike the Tennant Coat with its unique and quirky self-striped fashion lining.
I’ve spent years trying to trace it, with no success, so I resorted to commissioning my own rewoven version to ensure continuity of supply (see right).

So as well as the climate being different (a larger fan-base, all eagle-eyed on finding the right stuff), we are also seeing a base shift in materials and source.

I wonder what Series Seven will bring us by way of a challenge . . .
Posted by Steven Ricks Tailoring at 18:16