Green herring?
(as opposed to the red type)

I’ve been looking at the possible inspirations behind the new Green Greatcoat, and I came across this little curiosity.

I found it on the website for June Hudson.

It’s a speculative design by the legendary costume designer  – the goddess of Who clothing in the late 1970s and early 1980s.

It is described as:


Coat design for
the Eleventh Doctor
(Matt Smith) 2010
Speculative design: a green, military-influenced overcoat for Matt Smith as the Doctor. Produced in association with a class at the University of Redlands - Designing for TV Science Fiction.
May 2010.

Now this pre-dates Matt’s season six costume fittings by about a month!


You can see the original on June Hudson’s website:
June Hudson : Recent Designs

Could it be that June’s influence is still felt today – I very much hope so – or is it just an amazing coincidence?

Well to find out I traced Piers Britton, the director of the Visual & Media Studies programme at the University of Redlands in California.

He explained to me that June was a dear friend and a long-term collaborator. They first met when he interviewed her for a book he co-wrote, Reading Between Designs (see left).

This had been at the suggestion of Vice President for Academic Affairs, Nancy Carrick, who was a remarkably astute, enlightened and imaginative administrator.

Each time, a fictitious script for Doctor Who is concocted, for which the students design all the costumes. These scripts were hitherto always for the Eighth Doctor, such as Shada, The Blue Angel, The Scarlet Empress, Unnatural History and Fear Itself (both the last two in 2010). This coming year a script for the Eleventh Doctor will be used.

June always designs everything the students are given to work from, mentoring them throughout.

The class always entails a trip to the garment district in LA to look for swatches and in some cases garments, which June regards as fundamental to the design process.

Some of June’s designs for these courses are on her website; others can be found posted on Gallifrey Base called June Hudson in the expanded universe of Doctor Who, which has introductory comments from Piers.


The fantastic model shown here is by student Haley Keim, and more images of it can be seen on her portfolio website, which is well worth a look.
Haley Keim - Design Class Project

But the thing that interested me the most was THAT sketch of Matt Smith in a GREEN military overcoat!

This is what Piers told me:
As to the drawings of Matt Smith, in May of ’10 June was working on a cover for my new book, and wanted to get her hand in drawing the Eleventh Doctor. She adores Smith’s performance, and was keen to replace her original cover (with Tennant) with one featuring Smith. This led to a series of drawings of the Doctor and Amy which she executed as the class was winding down. I suggested she think about drawing Matt Smith in a coat, as he’d just gone on record saying he was going to get a coat. 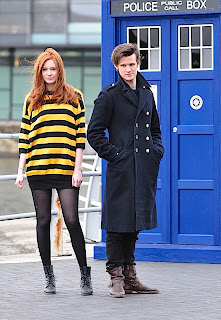 We watched the Confidential for The Vampires of Venice while she was here, and she felt the DB coat he wore there suited him well (he also wore it for photoshoots associated with the Doctor Who tour), so that was the very loose basis for her design. As you probably know, colour is very important to June, and she immediately said that she saw him in a mossy green.

She did three different coat designs (as she would have done if she was working with the actor in reality, to give him options), including one for a denim coat, which we thought was wacky enough for this Doctor; but the green coat was the first and the one she liked best.
I need hardly say we were both astonished when we saw the first photographs of the new coat first featured in Let’s Kill Hitler – and yet at the same time not, since she and Barbara Kidd are old friends and colleagues, and have a quite similar sensibility; it’s actually not that surprising to find them so much on the same wavelength.

So there you have it!


I’d like to thank Piers Britton for finding the time to pass on the story behind this design and the course it came from.

If you want to join June’s class of 2011, you can find details on the University of Redlands website.
Visual & Media Studies

Posted by Steven Ricks Tailoring at 07:32