So I have found myself an ideal pattern on which I can base my Greatcoat, but you might be interested to read how I got to that point.

College finished for the summer term back in July and because I am on an adult learning class we don’t start back until after the main juvinial students have settled in. This was going to leave me around 12 weeks without college support! Something I greatly value.
It kick starts projects; gives me incentives to maintain them; sets short-term deadlines to meet; as well as the help and advise from a knowledgeable tutor.

Before college broke up, she was encouraging us to join some one day classes running during the summer break, mainly about patchwork and machine embroidery, so not really any direct help to me. I suggested holding a one-day sewing workshop with no specific agenda, so we can catch up and maintain continuity with our ongoing projects. A lot of my classmates agreed this was a good idea, and our tutor said as long as eight of us signed up it would run.
Well, enough did and on 23rd August we had the class – perfectly timed as it was only a few days before the return of Doctor Who. My plan was to use the five hours of it to nail this pattern ready for cutting. 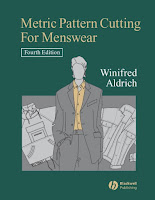 My tutor recommended referring to my copy of Metric Pattern Cutting For Men, which has proved to be a reliable source of pattern essentials. I have used it before when I was designing the collar to the Ultimate Tennant Suit with good results. I do prefer to use my period cutting guides, but this would still be a good place to start.

An outer garment needs to be that bit larger around the middle, to allow for a jacket or suit to be worn underneath. So it’s worth following this block rather than enlarging a jacket. 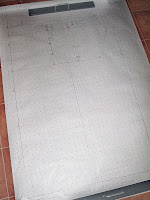 Drawing the block up is really very straight forward these days for me, so I had it done in an hour.
I then traced off a pattern adding seam allowances on just the sewn edges. This is then cut in cheap calico, and stitched to check for sizing. 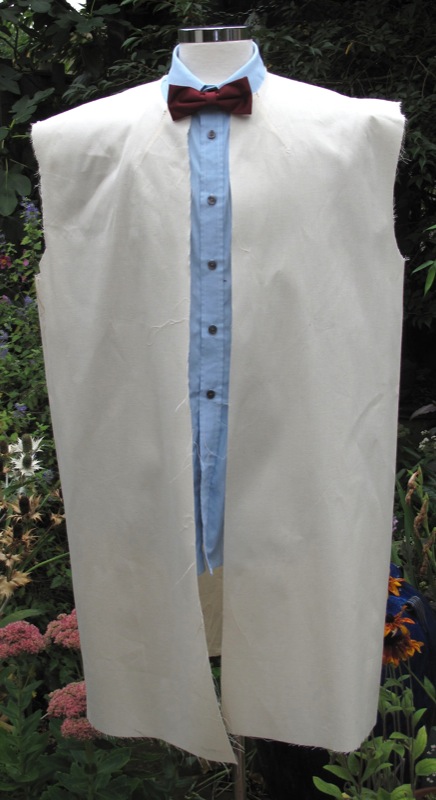 Once put together I found it fitted me well, and I had a basic, simple, but totally shapeless pattern to work from.

However, looking at the Greatcoat closer I felt it’s military style might be better served by finding some form of proper greatcoat pattern. That’s when I started looking around a bit wider. 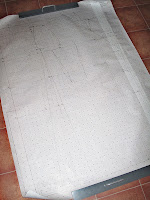 I stumbled upon the cutting block for the Army Alternative Greatcoat online and downloaded it to try it out.
The coat looked quite big, but I thought it could be peared down to me needs, so I gave it a go. 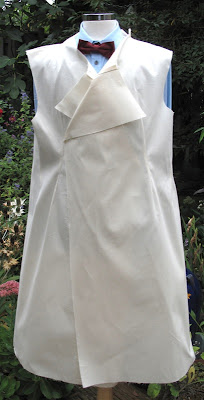 The style of drawing is a bit different for these older patterns, so takes a bit of getting used to. Anyone, once I mastered it I had it drawn; traced; and a calico made up.
At this point I found it to be way to big! The waist is kept in check with a vented back plus a half-belt. Beneath this the coat is what is referred to as an A-line, ie it is almost pyramid in shape!

Not discouraged I looked at the book title the pages had been scanned from and after a bit of online searching I found a copy on eBay with a buy it now option. It was a bit pricy, but I knew it would be worth the investment, if not this this but for future projects.

The book arrived a couple of days later and it is a treasure trove of classic patterns, as I previously outlined. 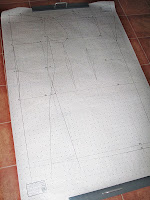 Anyway, after reading the potential patterns over, it was the Army Warm Coat that I homed in on for my pattern.

Having already drawn the greatcoat, I was already in the zone with the authors methods, so I had it drawn in an hour, along with the made up test calico.

This time I had something worth working from. I could see straight away it was a viable pattern and something to take to college.

My tutor was fascinated with what I had been doing and was in no way offended I had not used her recommended pattern. This was clearly better.

From this new base block I re-traced it, incorporating the design points needed for the Green Greatcoat. Working out the positioning of the buttons for the double breasting was critical.

Once these were in place, the relative size and placement of the vertical and horizontal outer pockets could be worked out  (you can just see my pencil markings on the final calico test - see below).

The plan was to then devise all the pattern pieces, right down to the welts for the pockets and the front and rear storm vents, so I would be ready to cut fabric once Let’s Kill Hitler had been screened and I could confirm my pattern was right. 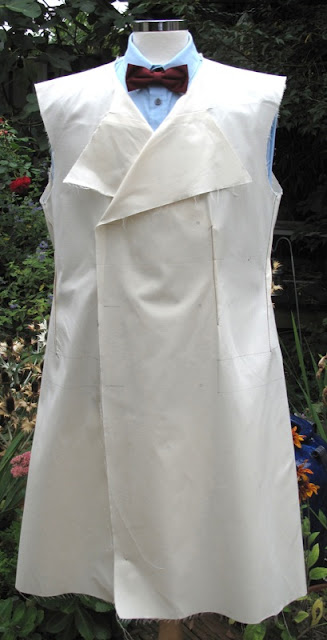 The calico I made in class required some minor adjustment to the side seam, which my tutor was on hand to advise on. Apart from that all looked good, and it was then just a waiting game until the weekend for the return of Doctor Who.
Posted by Steven Ricks Tailoring at 12:41