Greatcoat - where did THAT come from?

So, the first episode of Season Six part two has been shown, and we’ve now finally seen the new Green Greatcoat in action. 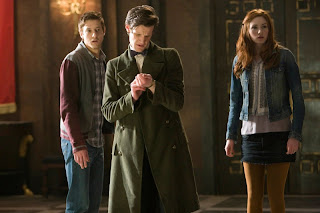 With it being mainly set in pre-War Germany, I think we were all expecting (certainly I was) that given its military style and appearance, the coat would be picked up somewhere along the line as part of the plot.

But no – Matt popped up wearing it from his very first shot! No explanation. So what was all that about? 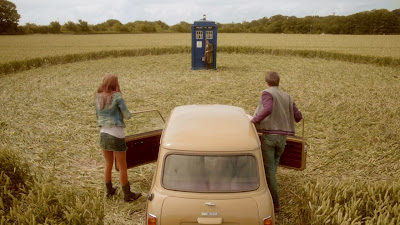 Well, from what I have been hearing, matt had been wanting an overcoat, and possibly a hat, for a while, but Steven Moffat had been deflecting the idea until now.

When I went to The Pandorica Opens preview on 16th June last year, Matt revealed he had that very morning been to a costume fitting, which we presume was for his Shetland Tweed jacket. That would certainly tie in with the fact that I know that 10 metres of the tweed fabric was purchased from W Bill on the 29th June, the largest single sale up until that point.

Anyway, the BFI preview of Let’s Kill Hitler also turned up some comments regarding Matt’s cosutme, this time the new overcoat. Here is what was said:

Steven Moffat Well, the Doctor went into the Tardis and realised he was starting to whiff a bit. Matt fancied a different coat. It’s not a great story, is it? I turned up one day and he was wearing it, I think.


A full transcript of the whole Q&A session can be read here:
Life of Wylie - Let’s Kill Hitler BFI Q&A 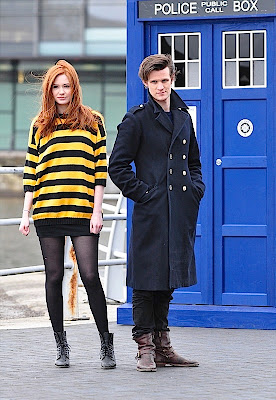 What Steven Moffat was probably referring to was the Navy greatcoat Matt wore during the 2010 press tour to launch series Five (see right).

This is not dissimilar to the new Green Greatcoat, with its large lapels; knee length; and double-breasted front.

So this has got me thinking. If I possibly want to make a replica for myself: I need to look into some patterns for military greatcoats and the like.

Now where will I find that?
Posted by Steven Ricks Tailoring at 22:09