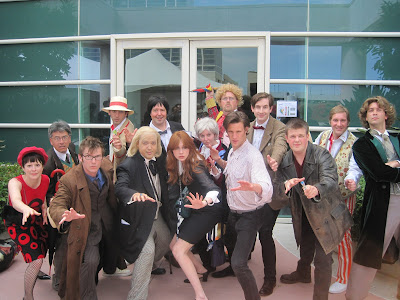 Two of these people are not like the others...

Because they’re not cosplayers! They’re the real deal. Well okay, as it turns out The Doctor and Amy Pond are cosplaying as Matt Smith and Karen Gillan... And they even got their hair right!

Bit of a crazy story behind this one. We were doing another Eleven Doctors photo shoot (as well photos with lots of Doctor Who costumers of all kinds in attendance) at the San Diego Comic Con 2011 when a film crew that was hired by BBC America to make clips to air along with the show when it starts the second half of Series 6, joined in on taking photos and doing video interviews with us.

Matt & Karen were just about to finish up their autograph signing on the other side of the huge convention center to which Bob Mitsch, our organizer (dressed in the photos as the First Doctor), was told by the very strict convention security there was no way any of us would be allowed to take photos with the actors at all. But with the BBCA film crew promising to help smooth things over if necessary – who also thought it would be great to get a group photo with the actors – we all started to head as a caravan to the autograph signing area to see if we could catch them as they were leaving.

Well we did – ust as they were being escorted outside in fact and even with the BBCA film crew following us their handlers started objecting, saying things like, “No, sorry they have to be going,” and things like that... But after Matt and Karen saw us, they flipped out, ignored the handlers completely and said, “Yes of course. We’d love to get a photo with you guys!” The staffers had to relent and then changed their tone to, “Well....Okay, but make it fast! They have other engagements.” Of course after Matt and Karen were really getting into it, the lead handler gave in as well saying, “Oh heck, I’ve got to get a photo of this myself!”

It was all very quick but I do recall Karen flipping out about how much I look like Tennant. She spotted me, came over with a squeal and said, “Oh my gosh this guy’s a dead-ringer for David!” then snapped a photo of me on her camera. MAN that woman is TALL! I had to look up at her when she approached me and she wasn’t wearing heels that were all that high either. After a couple regular shots, we all struck a “Doctor Who” pose at Matt's suggestion and then it was time to say our hurried “thank you’s” and “good byes.” 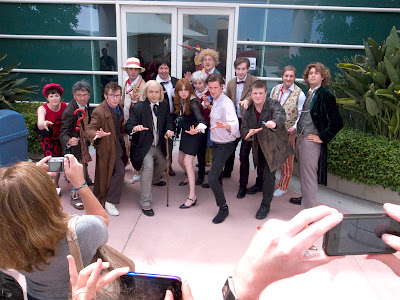 Upon re-entering the convention center through the doors behind us some additional security people (who I guess had been called in well after the fact) started shouting at us in the best threatening tone they could muster, “NOT COOL guys. That was NOT COOL!” To which one of our group responded, “Actually, it was cool. In fact, it might have been the coolest thing EVER!”

It was quite the funny sight seeing all of us walking by them looking cool as ice, half oblivious to what their problem was with huge grins on our faces while these people in yellow security shirts bellowed and gave us scowls.

I really did at first have no idea what they were going on about since I thought the BBCA crew had sort of unofficially led us there, but I guess not. Regardless, either because no real harm was done and Matt & Karen seemed to enjoy the brief encounter or because there were just too many of us to grab & kick out, all they did was yell and our group walked away with some great pictures and a new private in-joke for the phrase, “NOT COOL GUYS!” 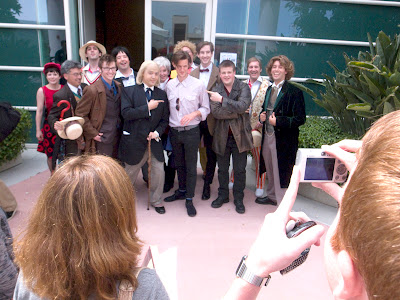 Posted by Steven Ricks Tailoring at 08:03