The new series is getting closer and closer, with it likely to premiere before the end of the month.

I’ve got my tickets for the BFI preview of Asylum Of The Daleks on the 14th August, and today we got the first full-on BBC publicity for the new series - both photographic and video.

Overnight a fantastic promotional image from Asylum Of The Daleks was released, showing an injured Doctor carrying an unconscious Amy Pond, surrounded by seven Daleks. 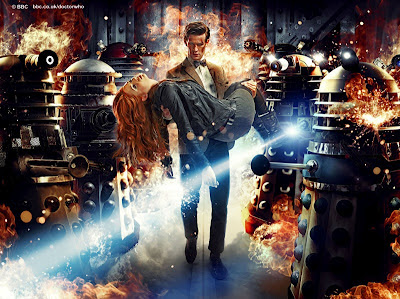 The image has been created by Lee Binding, who has done a number of the covers for the classic series DVD releases.
You can find him on Facebook under Tea-Lady Design, where today he posted about doing the image.


So proud to have done this. Huge thanks to Edward Russell for his brilliant guidance - and nipping down to the Cardiff basement to photograph the Special Weapons Dalek when we ran short of pictures. We like to think that the SW Dalek has been trundling around various BBC corridors since 1963. Photoshop users may like to know the final file was over a thousand layers, and 4.9gig in size. Phew!

As if that wasn’t enough, the new trailer for series seven was also launched today. It’s a 90 second roller-coaster ride of action adventure!

I don’t know bout you, but I can’t wait!