Over the three or so years I have been writing my blogs and sharing my experiences making my costumes, I have from time to time received messages from readers who have been inspired to pick up a needle and thread and sew for themselves.
Some have followed the instructions I have written; others have simply been incentivised to start a pipe-dream project they had been putting off. 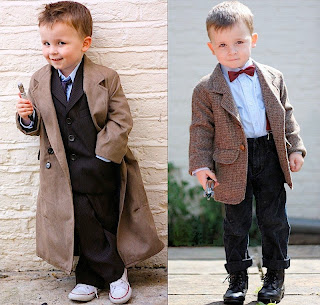 Well this week I had an email from a reader showing me their Matt Smith and David Tennant creations made for their 4 year old son, telling me it was all down to my blog!

I was amazed. These little costumes are very well observed, executed and fit real well (with a little growing room).

I had to find out more. After a couple of emails I now have the background story to the costumes, so for the first time I’m gonna hand over my blog to one of my reader to tell you more.

This was my first attempt at making clothing of any kind. For many years I had been making soft furnishings for my own home and various other crafty projects, but a small boy with a Doctor Who obsession dictated that I should give costume making a go.

Research proved that ready-to-buy outfits were not going to cut the mustard and buying the correct fabric by the metre was not a viable option for play costumes that would be grown out of in a year. Finding this website, I followed advice on searching eBay, found a few child sized jackets, but they were either not the right styling or the incorrect colour, nothing was quite right.

So, I decided to trawl charity shops looking only for ANY jacket that was the right or similar tweed. A 42" jacket was found in the closest I’d seen to the Harris tweed... now the challenge of making it fit a smaller than average 3 year old!

I had no pattern making experience, so winged it with my son’s measurements; newspaper patterns created with his dimensions; and by looking at as many pictures of the Doctor’s jacket as possible, plus as many views of the detailing. Of course this wonderful website proved invaluable! 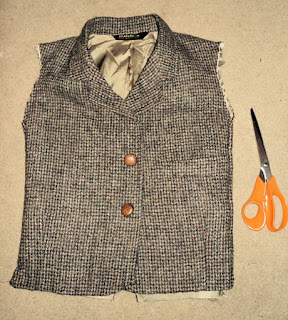 I started by taking the sleeves off. I kept the collar, as an inexperienced tailor I felt it might be too complicated and decided to try and use it as it was, just pressing it to the correct size.
I cut the jacket to the correct length leaving fabric for hemming and followed the angle and shape of the armholes cutting the jacket body to size. There wasn’t much I could do about the small breast pocket, but it proved to be an excellent ‘psychic paper’ and sonic screwdriver storage pocket. Zooming in on a variety of shots I sourced the leather coated buttons of the correct scaled down size from an online haberdashers. 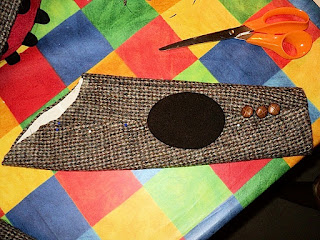 Next the sleeves, again following the shape of the original sleeve, keeping the lining in place and saving the shoulder padding to use when re-attaching and using my sons measurements, I cut both sleeves and pinned in place. I bought dark brown iron on patches from my local haberdashery and cut them to size and shape, then ironed and hand sewed them too to prevent them peeling off with wear. Now the tricky attaching of sleeves to the main body of the jacket. 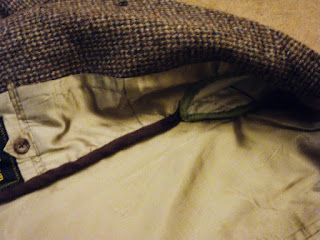 I cut the shoulder padding to size and tacked in place. Pinned, tacked and then finally machined, I then bound the seams with bias binding to neaten the interior of the jacket and make the arm holes comfortable for my son. 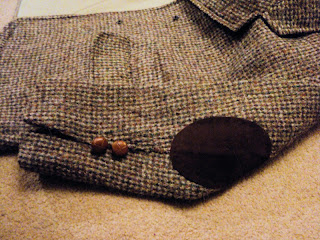 I added the faux pocket flaps, cut down from the originals, poppers for closure under the front buttons.

I left the inside pockets in place in the lining for extra Doctor paraphernalia, sewed on the sleeve buttons and I was nearly there! 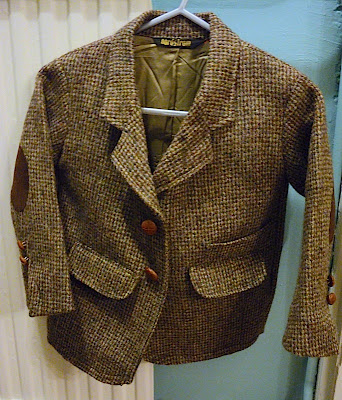 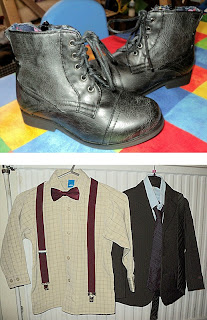 Overall I was very pleased with the final result... all done in a week of evenings and under the pressure of a visit to The Doctor Who Experience the following weekend!

Not too shabby for a first attempt, but I am niggled by the lack of tailoring and in the next version I will attempt darts in the back to give the jacket more shape and to allow it to hang better.

The boots were bought in a sale I snapped them up the second I saw them! The shirt is off of eBay and braces and bowtie from a online occasions website.

Jamie will love being on the internet :) he is an actor in the making and totally gets into the character of which ever Doctor he is dressed as at the time!
Posted by Steven Ricks Tailoring at 15:12