As you may haver read in my blog, I booked my tickets for the Official Doctor Who Convention taking place in Cardiff in late March.

Now, I was none too impressed with their charging structure, so had to book for both days so I could get my photo taken with Matt Smith, as well as get his autograph.

The organisers did see the error of their ways (partly) and refunded those who book for Steven Moffat’s photo and autograph, changing the policy on the add-ons.

We this morning I had an email in my inbox announcing a further add-on - this time for free - and something WORTH having!

A FREE TOUR OF THE TARDIS CONSOLE ROOM SET AT THE UPPER BOAT STUDIOS! 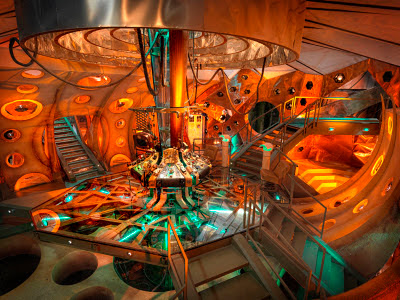 And Who wouldn’t want to see that!!??
They even give you a complimentary bus between the convention venue and the studios, departing hourly, with ten tours on each day, plus some on the Monday after the event too. 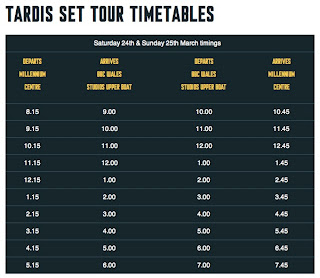 Now, my only criticism is they could have planned them in a bit better.

Since you are paying £99 for the day, plus £25 for the photo/ autograph add-ons, you really want to get your money’s worth.
So taking time out for a studio tour - even if it is free - means it’s costing you money in the main event item you are missing out on.

Even if you book a tour that times with your chosen events, a 45 minute bus ride could get held up with traffic.

I know this is the first such event the BBC has done since bringing Doctor Who back, but you’d have thought they’d be able plan a (technically) one day convention better.

Honestly, I’m not complaining about the additional free tour, but some joined-up thinking wouldn’t have gone amiss.
Posted by Steven Ricks Tailoring at 21:17