Since it is day TEN of my Twelve Regenerations Of Christmas, I have something TENTH Doctor related.

My most popular entry, the Tie Index, sets out to document the ties worn by David Tennant.
I’ve spent a long time researching it and done my best to make it as complete and accurate as possible.

Fans have their favourite Tennant ties, such as Tie Four, The Swirly Christian Lacroix tie (see above); or Tie Seven, the Giorgio Armani (see left). These were used in four and eleven episodes respectively.
But a tie that is overlooked is Tie Nine (see below), which appears in a respectable ten episodes. 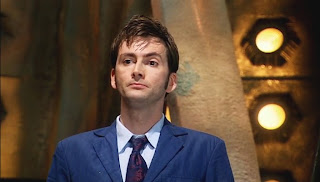 I’ve been searching for this one for a while with no luck. But then a few weeks back one of my readers sent me an email out of the blue with the info I needed – and this comes from a reliable source! Trust me.

I can now reveal its label is Kenzo.

So this is how the entry can now read. 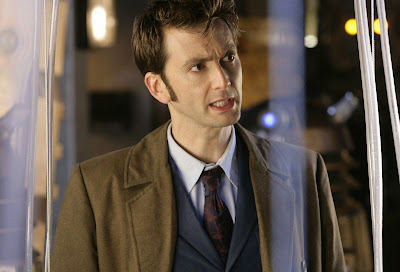 First seen in: Daleks In Manhattan

Also seen in: Evolution Of The Daleks, The Lazarus Experiment (see right), The Last Of The Time Lords, Time Crash, Voyage Of The Damned,  The Unicorn And The Wasp, Silence In The Library, Forest Of The Dead, The Waters Of Mars