Today sees the release of the promotional stills for the next episode, Hide.

This was the first episode to be filmed with Jenna-Louise Colman back in June last year, and at the time we got the first official glimpse of The Doctor’s new costume.

Now the new stills are have a much better look at this combination.

He is wearing the brown bow tie he first wore in The Rings Of Akhaten.

The shirt is new - and is in a blueish grey stripe.

The now favourite grey waistcoat is on show again, and like The Rings Of Akhaten, is without the double fob chain.

As an aside I’m not too impressed with this photo. It has been crudely cut out and I swear part of his right boot is missing - if it isn’t, it looks bloody odd!

Also released with this image is a picture of Matt in the full Tenth Doctor’s pumpkin orange space suit, though from what I can see the SB6 patches are not present and there are no scars from their removal. It appears to be a recreated costume rather than a re-ue of an existing, unless anyone can think of where this version was seen before. 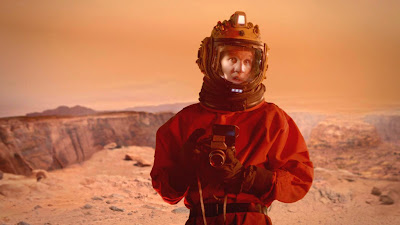 Posted by Steven Ricks Tailoring at 09:15