No change for series seven costume

Filming started today on the next series of Doctor Who, and to show off, the BBC released an official publicity still showing Matt Smith and co-stars Karen Gillian and Arthur Darvill.

What the image does show us is The Doctor’s costume remains unchanged from Series Six, with the Shetland Tweed jacket; black G-Star RAW jeans; blue tabbed collar dress shirt, accessorised with burgundy bow tie and braces. 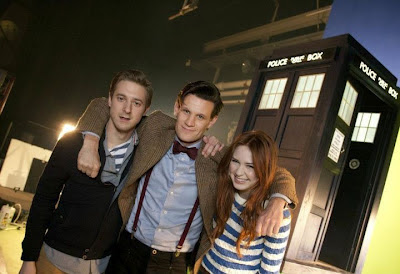 There had been hints that Matt wanted a change, possibly to a leather jacket, but for now things stay as they were. For now . . . .
Posted by Steven Ricks Tailoring at 18:28