So I’ve touched down back in LA to attending this years Gallifrey One convention.
This is the third year I have come, and have been greatly looking forward to catching up with everyone and show off a few costumes I have been working on, so of them in secret . . . 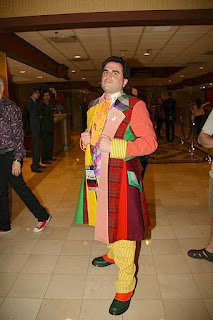 The day before the convention kicks off has a evening gathering in the lobby of the hotel, affectionately called Lobby Con.
It generally carries on throughout the weekend, but most people are downstairs in the ballroom area where the main events are taking place.

I quickly spotted a client of mine, who as been the first to take delivery of a Ultimate Six Frock Coat.
He was proudly wearing it a gaining a lot of attention and questions about what it was. Many had seen my work on it, so this was their first chance to see it for real. 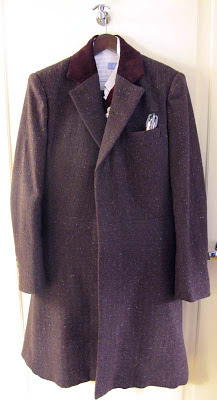 It wasn’t long before the lobby was buzzing with cosplayers and those casually dressed.

The last thing I wanted to do was turn up at the party wearing the same dress! Besides, I didn’t want to take any limelight from my client who was enjoying the attention he was getting (and rightly so).
Time I thought to premiere a NEW costume I made this month which I have been keeping under wraps - my Matt Smith Series Seven Cashmere Frock Coat.

I have been prepping this for a little while now, collecting reference images to make sure I cut it just right, as well as gathering the accessories to make it complete. These include a burgundy velvet waistcoat with a laid-in collar; a bronze fob chain with a hanging penny; the G-Star RAW jeans I have from my series six costume as well as just a place-holder bow tie for now; but to top it off , the day before I left London I collected my brand new hand-made boots. 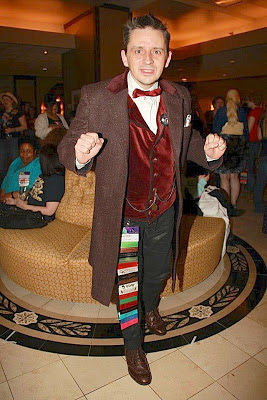 The costume had a mix of reactions, mainly because not everyone is familiar yet with the latest incarnation of matt’s costume, so they assumed it was either my own improvised future Doctor’s clothes; some wondered if it was The Next Doctor; or seeing the waistcoat, thought it was from the latest Christmas Special.

But the consensus of opinion was it looked GREAT!

Check back real soon and I’ll give you an exclusive glimpse inside the boot makers and give you a great preview of Matt’s new footwear. 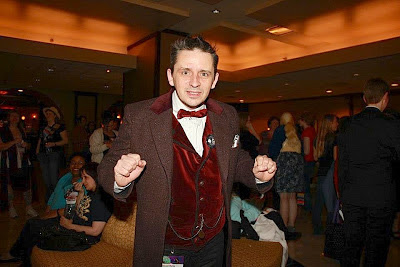 Posted by Steven Ricks Tailoring at 16:38