The new series of Doctor Who started this week, and I thought I’d bring you some more pictures from my massive Cardiff photoshoot earlier this year. 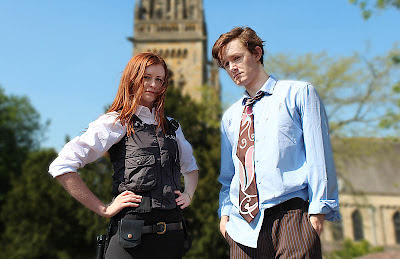 After finishing in Cardiff Bay where we visited Eddie’s Diner as seen in The Impossible Astronaut; and The Millennium Centre as featured extensively in The Girl Who Waited as well as New Earth, we packed up and headed towards Southerndown Beach.

Literally on the way to the beach is the village of Llandaff, which has popped up several times in the new series.

In 2006 it was used in Human Nature and Family Of Blood where it was the setting for the Farringham School for boys; in the same story the cathedral was where John and Joan get married; the cathedral was used again in 2010 as the church in Vincent And The Doctor.

But its most recognisable appearance was in The Eleventh Hour, when it was used as the principle location for Amy Pond’s home town of Leadworth.

So we thought we’d have a bit of fun.

We already had our superb Eleveth Doctor look-a-like, Matt Elliott; plus our Amy Pond, Lisa Baxter - so the obvious thing to do was to recreate the scene where The Doctor tries to placate an irate Amy Pond!

Lisa has her own Amy Pond kissogram outfit, so that was easy; I was able to quickly pull together the Doctor costume by providing the tie and a pair of genuine GAP trousers. Matt supplied a cheap shirt from Primark, which Lisa appropriately distressed.

Shooting with a sports setting on my camera, we did half a dozen takes of the pair walking up the hill away from the cathedral.

We attracted a small audience, wondering if it was the real thing!
They soon realised it wasn’t, but a couple of school girls asked if they could have their photo taken with our look-a-likes, which was fun.

Our plans for some further shots had to be curtailed, as we realised the Olympic Flame - as referenced in Fear Her - was due to come right through the village on one of its early stages. (The following day Matt Smith carried it a few hundred yards in Cardiff city centre).

We did have just enough time to do a couple of portrait shots. 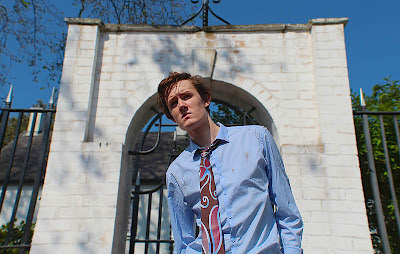 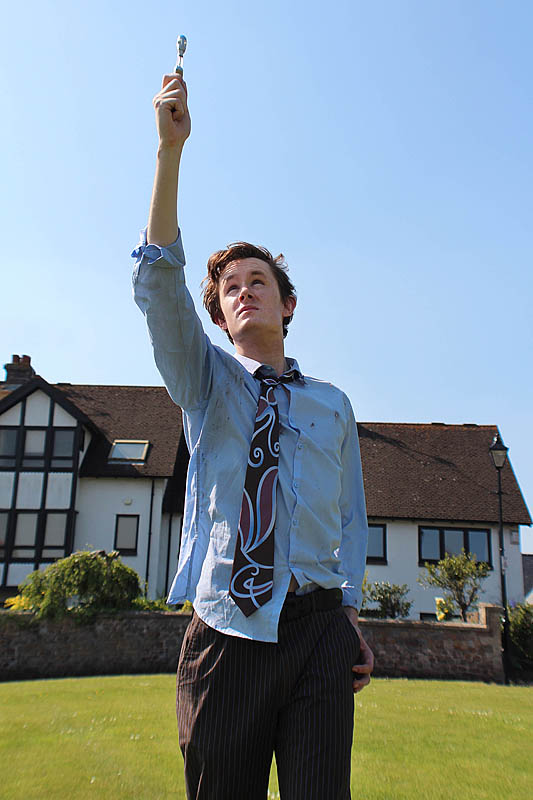 Posted by Steven Ricks Tailoring at 15:28