OMG -The Doctor has got a new COAT!

Filming on the new series was back on location this week, and we got the very first look at a brand new addition to The Doctor’s wardrobe – a Green Overcoat!

The crew had been filming in a Cardiff department store for what is expected to be an episode from the latter part of Season Six, with James Corden looking like he is returning to play Craig from last seasons The Lodger.

It looks like the Cybermen may be back, with Matt holding what looks like a re-imagining of the cybermat, not seen since 1975.

Luckily some keen Who fans were around to snap some pictures, and these initial images give us the first hint of the rear of the coat, which has a very distinctive yolked back, which seems to hang separate from the body of the coat.

It was fantastic to get a heads-up on the new coat, but the pictures had been taken in difficult circumstances from quite a distance, so their real detail is limited at this stage, and there is no indication as to how long the coat is.Is it another ankle-legth job like Ten’s, or will it be a more modest three-quarter length? Time will tell I guess.
The pictures got picked up by Doctor Who tv, who ran an article on the new costume (see below). 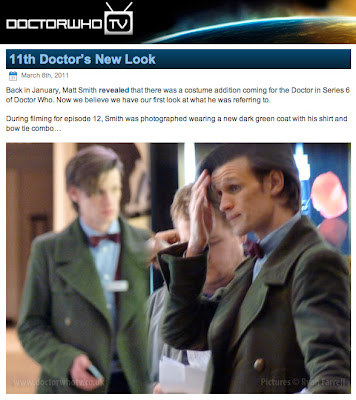 By the end of this week filming had moved to exterior scenes and at last we got to see the coat in its complete KNEE-length glory! (see below) 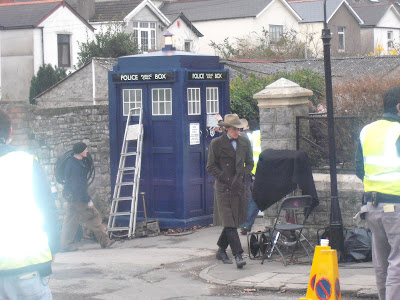 It’s interesting to see Matt is wearing the Stetson he was wearing for the American Utah filming last year. I wonder how that fits in with things.

There was a bit of press coverage following this, notably in The Sun, which highlighted Matt’s keepy-up skills between takes. 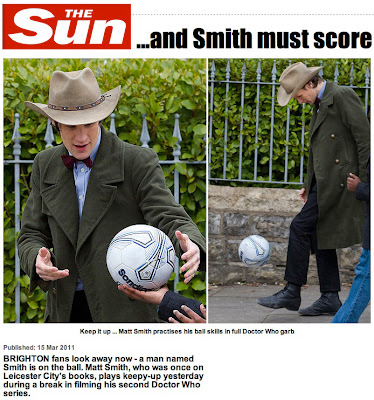 THE SUN – Dr Who star plays
keepy-up with football

But what every Doctor Who fan was looking at was THAT COAT as the article was accompanied by professional paparazzi photos, which show a lot more detail (see below). 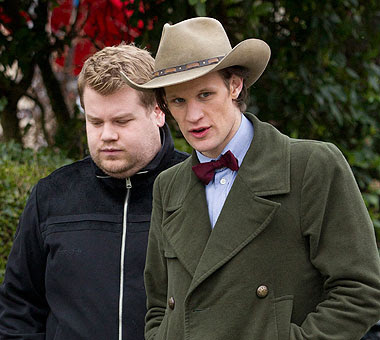 I’m guessing it will now be a while before we see anything half decent by way of publicity stills between now and when the episode is due to air, which won’t be until the middle of Summer, if last season is anything to go by.
Looking forward to that when it happens!
Posted by Steven Ricks Tailoring at 21:02