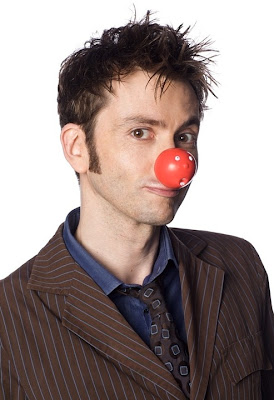 This coming week is Red Nose Day, and following on for several previous Doctor Who involvements, there is a special mini-episode to be screen as part of the  Comic Relief fund raising entertainment.

This gives the excuse for a Red Nose Day inspired photoshoot. David Tennant had appeared in 2009 to publicise the cause (see left) and this year it turns to Matt Smith to take up the baton. 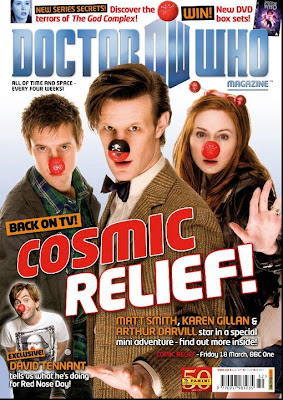 He was joined in the photocall by Karen and Arthur, and images of them appeared on the cover of this month’s Doctor Who Magazine (see right).

It gives another nice close-up of the new ‘tweed’ jacket Matt wears, as well as the while gridded shirt.

He can also be seen sporting a new bow tie in a midnight blue silk. 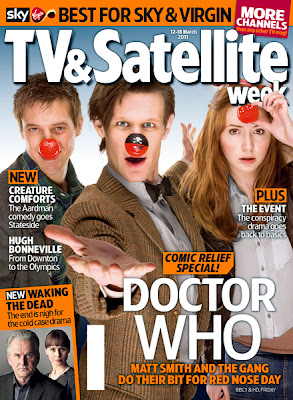 The pictures were also picked up by some of the UK tv guides, notably TV & Satellite Week, which needs only the slightest excuse to use a Doctor Who cover to increase circulation!

You can clearly see it is from the same photoshoot, but hold on a moment – Matt’s shirt is now a very pale BLUE! (see left) 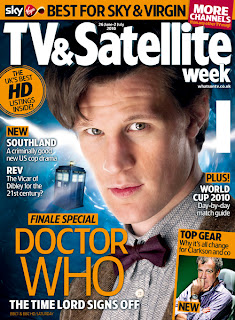 Now, TV & Satellite Week have form when it comes to messing around with the colour of Doctor Who images!

Matt is wearing the blue variation of the Paul Smith shirt, but his bow tie is BURGUNDY!
But if you look closely you can see a texture to the fabric of the tie. The burgundy tie was a plain fabric, but the blue had a woven texture – exactly the same as seem here.

The bow tie has been Photoshopped to the wrong colour.


Comic Relief’s Red Nose Day is a very good cause,
and if you want to donate some money, click the link below to find out how you can help.
Red Nose Day 2011

Posted by Steven Ricks Tailoring at 21:09