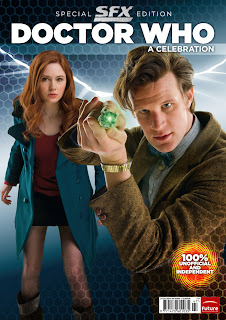 Today saw the publication of the SFX Magazine, Doctor Who: A Celebration.

I particularly wanted to grab a copy as I knew it was to contain a number of costume related items and articles, and it hasn’t disappointed.

While I was on my way to Forbidden Planet to pick up my copy, it occurred to me that the free bow tie could turn out to be some cardboard thing with elastic at the back!

Luckily it is a pukka clip-on bow tie, though a cheap one (hey! what do you expect for a giveaway?)

Only downside is that it’s a child-sized one! (see right, top). 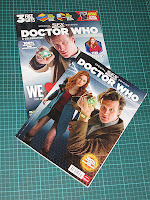 The magazine comes in a large card envelope (see left) which also holds the bow tie and two badges (see above).

From the costume point of view, there are a couple of highlights.

First up as a feature interview with Series Five costume designer Ray Holman.
The best part of this is a discussion on the matt Smith costume, and a reproduction of the design itself! (see below - click to enlarge and read) 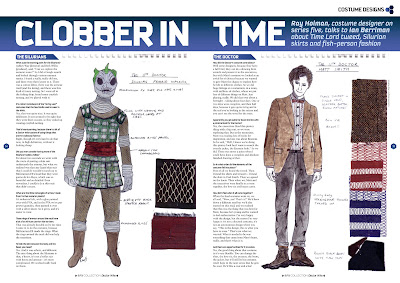 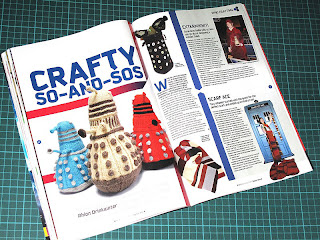 Later in the magazine is a four-page feature on the Doctor Who crafting, a lot of which appears on the Crafty TARDIS forum.

There’s a lot of knitting involved! I love the knitted Daleks, as well as the more obvious scarf-work (see left). 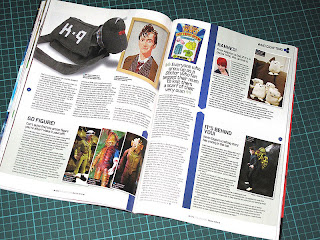 There is also coverage of the controversial knitted Adipose dolls, which resulted in a Cease and Desist from the BBC. 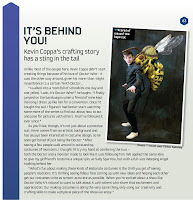 Just under that feature is one on Kevin Coppa, who has done a lot of conventions in his various Tennant costumes. He is shown in his Tennant Suit, with a wasp on his back! (see left - click to enlarge and read)

Elsewhere, there are lots of great reference photographs and articles worth a read.

SFX Special Edition:
Doctor Who – A Celebration
is available at £7.99 for a limited time at good good newsagents in the UK.
It is also available for download to read on the iPad from the iTunes App Store for £4.99

All in all well worth the £7.99 investment!
Posted by Steven Ricks Tailoring at 21:20