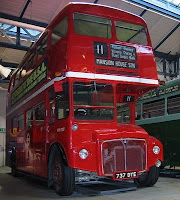 I’m not referring to the Number 11 bus – but the Number Eleven Doctor!

The new series of Matt Smith episodes is currently in production, and some on location pictures have emerged, showing The Doctor’s NEW costume!

Some pictures were knocking around when the Christmas special was being lensed, but they were quite distant and not top quality. These new ones, however, have been taken by paparazzi and so are much higher res and show a lot more detail.

What they do show are the complete change of costume assembled for the new series. Now, it doesn’t at first glance look that different, but like the season 19 vs season 21 Fifth Doctor chance, it is a revisiting of the constituent parts.

JACKET
It’s still a tweed, but it doesn’t take much to notice it is a different pattern of fabric with a much bolder checked pattern. What you might not notice at first glance is it is a three-button closure, rather than a two-button like before (see right).
The elbow patches are basically the same!

It’s no longer a Paul Smith shirt, and appears to be a white shirt with a pale coloured grid or gingham check. The cuffs are distinctive for a 45 ˚ chamfered corner (see above).

BOOTS
The All Saints boots are out, and some look-a-likes are in. They can be distinguished by the stitched arch across the brow of the boot (see right). 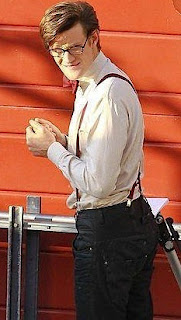 TROUSERS
These look very similar to the TopMan ones previously worn, but are of a more waxy finish and have distinctive deep back pockets (see left).
ACCESSORIES
Matt appears to be wearing the same braces as before, and a similar bow tie (bow ties are cool, btw) but it does seem to be a shade bigger than before.
Posted by Steven Ricks Tailoring at 20:35