The final Barking signing event of 2015 was a late addition to the calendar, and brought together a handful of interesting guests.

As I arrived I bumped into a couple of good friends, Chris and John, who I hadn’t seen for a while, so it was good to catch up with them before going in.

The guest list wasn’t as full as previous events, but I did still need five autographs, so the buy-four-get-one-free policy was perfect for me. There was a predominance of Eleventh Doctor actors too, which we don’t usually see for some reason. Tenth Planet Events are quite classic series biased - not that I am complaining! 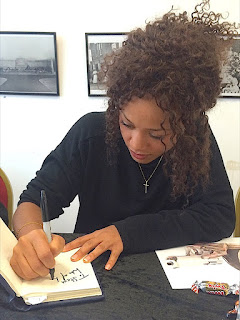 I got her to start a new blank spread too, with a view to adding Alex Kingston when I get the chance.

LIZ WHITE portrayed Alice the servant in The Snowmen. She also voiced Genestain The Brink of Death. 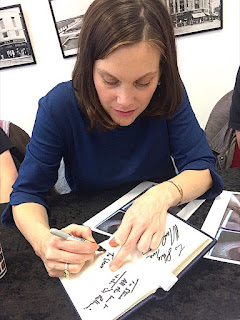 BILL PATERSON played Dr Edwin Bracewell in Victory of the Daleks and The Pandorica Opens.
He has co-starred with many Doctor Who actors during a career. He was the lead character in Sea of Souls, which was produced by Phil Collinson immediately before his move to Doctor Who. During the series he worked with many Who-related guest stars, including: Paul McGann, Michelle Collins, Colin Salmon, Michelle Duncan, Peter Guinness, Christina Cole, Peter Capaldi, Sarah Haynes, Nicholas Gecks, Ellie Haddington, Louis Mahoney, Michael Obiora, Eric Mason, Bhasker Patel and Struan Rodger.
After Souls, he was the senior Crown Prosecutor in the first four series of Law and Order UK. He was thus the boss of Freema Agyeman's character — and eventually surrendered his wig to Peter Davison. 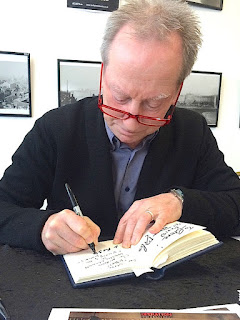 Bill is someone I definitely wanted to meet. He's been appearing in series down the years with his distinctive Scottish accent, from Hitch-Hikers Guide To The Galaxy in 1978; through The Singing Detective; and the many documentaries and to adverts he's voiced since. I'm greatly looking forward to his Fraiser in the upcoming Dad's Army movie due out early next year.

I have simon in my book already, which is just as well since he is there today outside of the Tenth Planet Events guests, and is charging separately. Best of luck to him.

ANNEKE WILLS played the First and Second Doctor's companion Polly from The War Machines to The Faceless Ones.

Anneke is a lovely lady, but I got her autograph at a previous event, so I don't need her today.

JAYE GRIFFITHS played Jac in The Magician's Apprentice and The Zygon Invasion, as well as a lead role in 1990s espionage drama Bugs. 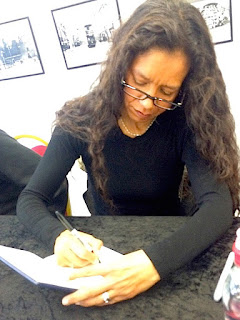 Jaye is one I need for my book, and I got her to sign a new blank spread so I can add Kate Lethbridge Stewart in due course.

MICHAEL MCSTAY played Derek Moberley in The Seeds of Doom. 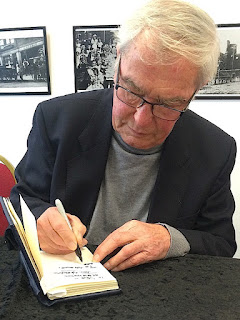 I'm not over familiar with Michael as an actor, but with the fifth free autograph, I've got him too. 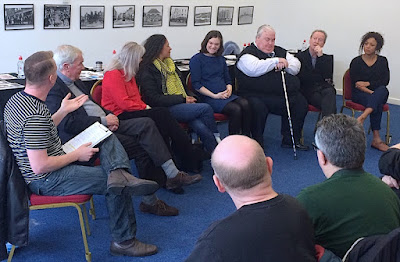 Once everyone had their autographs it was time for the Q&A session. 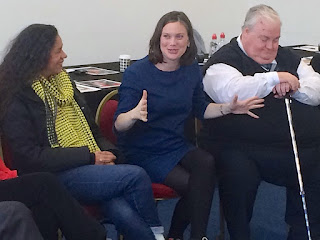 It kicked off with Liz Smith talking a lot about her time on Life On Mars. She recalled the attention to detail the producers went to for every aspect of the series. She said there were drawers in the police station containing index cards full of supposed crime info. None of it was seen, but it was there just in case it was needed.

She also told us a hilarious story about dog poo! The producers had made fake poo - in white as that was what happen to it in the 1970s due to the additives in dog food at that time. I must admit it chimed a chord with me and they were right!

She also remembered the ‘period’ costumes that had to be made, as true vintage clothes don’t really fit the figures of today. 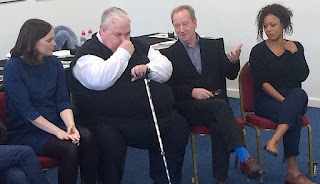 Turning to Bill Paterson, it quickly emerged this was his first EVER event appearance for anything he had done, so it was a bit of a coup getting him.

As well as talking a little about Doctor Who, he spoke about his up-coming appearance as Fraser in the Dad’s Army film. He said it was over a year since they had shot it, but the producers were waiting until February to release it as similar films with elderly casts perform better if released during the first three months of a year! 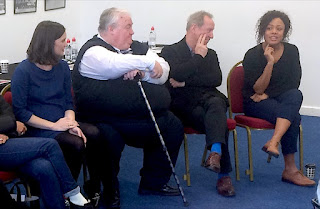 Nina Toussaint-White recalled her first big break, working on EastEnders and seeing the Albert Square at Elstree Studios, a stones throw from where I live.
She said although it has quite a big cast, it was quite a lonely experience to work on as she only ever got to meet and interact with a limited number of the cast, mainly those playing her close family.

Simon Fisher-Becker is well known for being a big Doctor Who fan, but he said this was affirmed when he was first on set and seeing the TARDIS. This made him even more of fan rather than a follower. 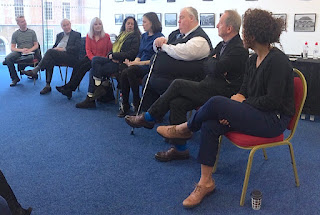 Jaye Grifffiths was someone I wanted to hear from, but was desperately disappointed with her comments and recollections.
For her acting is just a job and nothing more. It is all about the next job, rather than endlessly looking back at the last. She described acting as more about the people you work with and how you bounce off them rather than the work itself. This meant her memories of programmes she has worked on are all impressions rather than recollections of specific happenings.

Talking of Doctor Who, she said she was totally unaware of UNIT and the place it holds in the folklore of the series. She did say working with Gemma Redgrave was enormous fun, as was being chased by aliens and commanding UNIT personnel with their big guns! 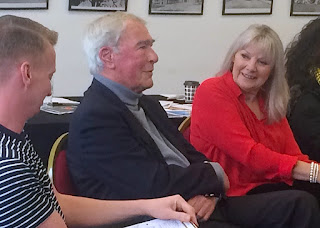 Addressing the whole line-up, they were asked what had been their worst location shoot. Jaye’s was undoubtedly having to be in the Thames for Bugs. It was freezing cold and filthy but the only footage used was a tight close-up, so she could as well have been in a warm bath rather than a stinking river!

Michael McStay remembered having to film on a rubbish tip close to Heathrow airport, and Bill’s worst was the heat of Karachi for the Channel 4 series, Traffic. 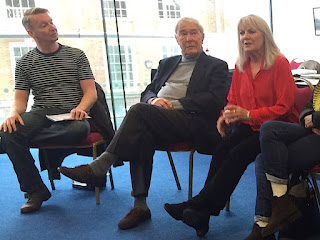 Anneka Wills, vertically, remembered the studio-based tank filming for The Underwater Menace, which has recently been released on DVD.

She then had the nerve to say what I am sure a lot of us have been thinking, that The Underwater Menace is really just a load of rubbish. She went on to say the release itself wasn’t the best and felt quite rushed and incomplete.

I have to say I do agree with her. Pity it wasn’t one of the Patrick Troughton Dalek stories that had been re-discovered.
Posted by Steven Ricks Tailoring at 11:30