This unusual item turned up on eBay this month, being auction for charity. 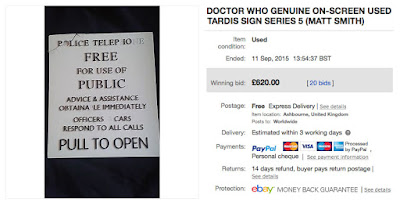 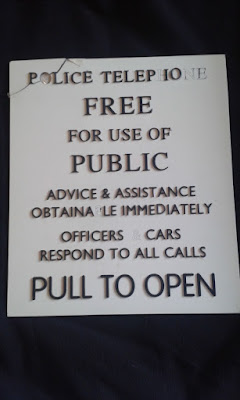 This is a very rare item, a genuine TARDIS door sign, used during the filming of Series 5 of Doctor Who, the first to feature Matt Smith as the Doctor. The sign, having been used for filming was damaged en route to a filming location and was then replaced. The damage is apparent. One corner has broken off altogether (although is present and has been reattached by plastic film applied to the rear of the sign). Some of the letters have also come adrift and are missing. 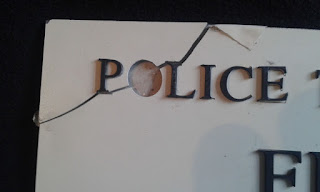 The photographs show the worst of the damage.
The discarded sign was rescued by Tristan Peatfield, who worked as Stand-by Art Director and then Production Designer on that series (between the departure of Ed Thomas and the arrival of Michael Pickwoad). 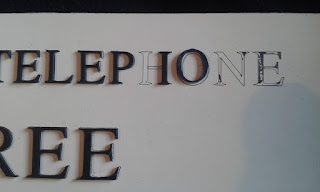 I am selling it on Tristan's behalf, in aid of the charity that he and his partner Kim established in the name of their daughter Isabella, who was the youngest British victim of the 2004 Indian Ocean Tsunami disaster.

Questions and answers about this item
Q: I would like to know if there will be a Certificate of Authenticity (COA) or some other documentation illustrating the authenticity and history of the "DOCTOR WHO GENUINE ON-SCREEN USED TARDIS SIGN SERIES 5 (MATT SMITH) included with the item? Thank you.
A: I can arrange for this if needed.

Q: Hello, I was curious, do you know what episodes, specifically, this sign was seen in or could have been seen in? I understand it was Series 5, Matt Smith's first season, and with the range of assistants you listed it could have been anything before the Christmas special, but I was wondering if you could help me narrow that down. If not, that is perfectly fine. It's a wonderful item either way, but I was considering bidding on it as a gift for someone and it would be better if I could at least give an episode, a range of episodes, or say "this is the sign from most of Series 5" if that is indeed the case. Thank you.
A: Hi, I have asked Tristan this very question, but I'm afraid he just doesn't remember. It will have been earlier rather than later in Series 5, I believe.
Posted by Steven Ricks Tailoring at 15:12