So far I’ve shown how Budd Shirtmakers have provided shirts for both Peter Capaldi and Matt Smith. 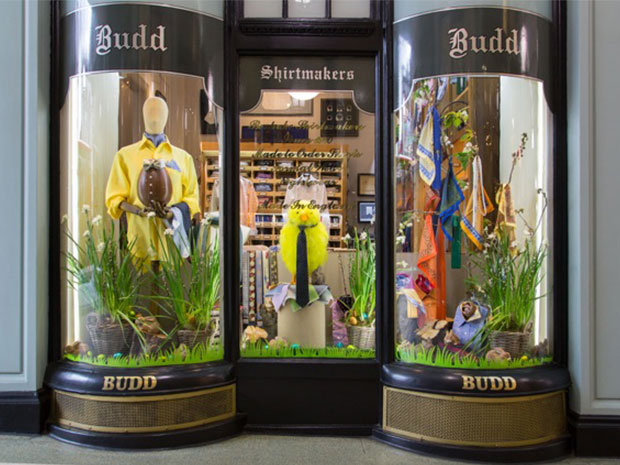 Well, while I was chatting away to them at their Piccadilly Arcade shop, I found out they also made a number of Matt’s bow ties!!!

Specifically the final three worn in the latter part of series seven.

The first they made appeared in the episode Cold War.

This was shot in very dark and often coloured lighting, so its a bit hard to make out the true shade of the fabric, but I think it is a dark grey to olive colour with a design of light coloured circles in a grid formation.


Their next featured exclusively in The Name Of The Doctor.

Again the episode was shot in mirky, dim lighting so it’s near impossible to fathom the true colour.

However, with luck this bow tie was given away as a prize in the Anniversary week issue of the Radio Times, along with a nice clear photo to illustrate it.

I showed the guys at Budd that it had been a competition prize, and they didn’t know it had happened.

Finally they made the more widely seen bow tie that featured in The Day Of The Doctor, and The Time Of The Doctor.

This is a deep purple colour with a open-spaced polka-dot design.

Abby Shot have made a replica of this bow tie.

When I found that Budd had made these bow ties I naturally asked if they had any left, or if they could remake them to order.

They then told me the curious story behind their creation.

The bow ties they make are best thought of as a by-product.

As well as making shirts, Budd produce top quality silk dressing gowns from short run silks sourced from a variety of weavers. Once the gowns are made the off-cuts - so they do not go to waste - are recycled into bow ties!

This makes them very thin on the ground as only a handful are ever produced in any one fabric.

We had a rummage through the box of left over silk, but none matched these ties.

I even suggested that if one of the dressing gowns was still for sale I would buy it and have it cut into bow ties!
Sadly all were sold and they weren’t too sure what the workshop would think about butchering one to recreate what they regard as purely a by-product of their work!

So, funny to think after finding just a white shirt, the same source has turned up a further screen-worn shirt and no less than three bow ties!
Posted by Steven Ricks Tailoring at 13:35