Today was The Entertainment and Media Show at London’s Earls Court. It’s in the exhibition centre above where the infamous Doctor Who exhibition was held during 2008-2009.

Despite being the start of October when it should be cold and wet, it’s instead expected to hit 29 or even 30 degrees, hotter than a good summers day! It ended up being hotter than Athens, Los Angeles and The Bahamas. 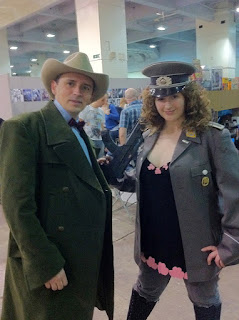 My tweed jacket will be too warm to wear, but in for a penny in for a pound, I’m determined to wear my green Greatcoat regardless! If I’m gonna sweat it may as well be in something worth being seen in - and tweeds are so last season! Hehehehe

Well it seems to have been worth it as I was not even halfway there when I spotted someone in a tweed jacket and bow tie down the end of a platform.

He gave me a nod and a smile, and then couldn't resist coming over to ask where I got my coat! A handy business card soon helped him out. 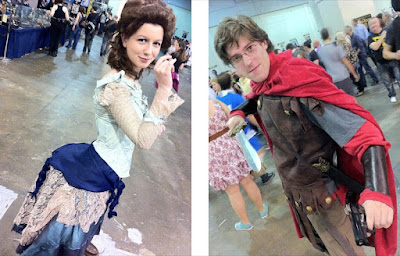 Arriving at earls court I found it was pretty chaotic. There was one pretty hefty queue, which had to be split into those who had prepaid and those looking for 9am entry. Once the stewards had prevailed over the venue security team, everyone was back on track and it wasn’t too long before we were in.

Luckily it hadn’t gotten too hot outside as yet, and the hall was air conditioned, so it wasn’t as bad as I feared.

The event isn’t really a convention - more of a signing opportunity with a range of eclectic ‘stars’ and tentative hangers-on.
Don’t get me wrong, David Tennant, Dame Diana Rigg and John Hurt are big names, but the bloke in the Bossk costume from The Empire Strikes Back really could have been anyone; and the range of stars from the boxing ring were appropriately tucked out of sight round a corner. 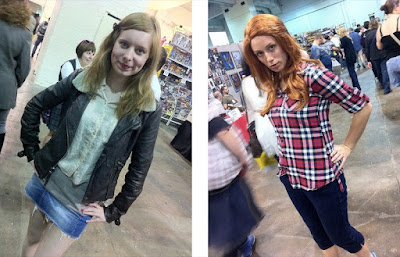 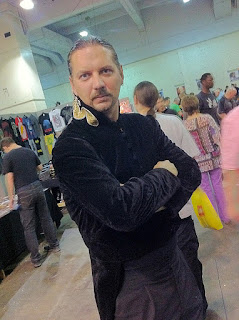 There was a good turn out of cosplayers, and a healthy number in Doctor Who costumes. One thing that did strike me quite quickly was the near total lack of classic series costumes. I only found one: The Master! (see left)

What was in evidence - and by the coach load - were Matt Smiths and Amy Ponds - well there’s a surprise. 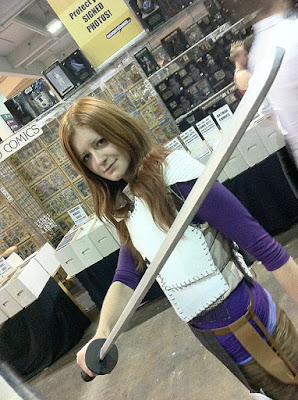 However, one costume stood out for me way above all others - Amy Pond from The Girl Who Waited.

She had not only sourced the right trousers, she had replicated the armour near-perfectly. And given the episode was only screen a couple of weeks back, that was good going. 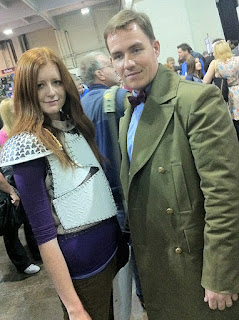 I also managed to snap a handful of cool cosplayers from the Doctor Who Adventures generation. 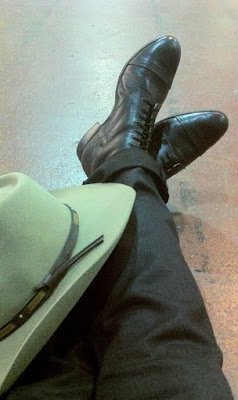 The event was over two days, but I decided to only go on the Saturday. There is precious little places to sit down so being on your feet for 8 or 9 hours wandering around the same old dealers stands looses its appeal after a while, and standing in endless queues for photocalls isn’t much better.

That said, this was the first chance I had to give my season six boots a proper outing, and they were seriously comfortable the whole day. It was still nice to rest them for 5 minutes late afternoon though! (see left)


Lastly here are some other genre costumes I snapped while wandering around. I especially liked the Alien, but the Mad Hatter was a highlight too. 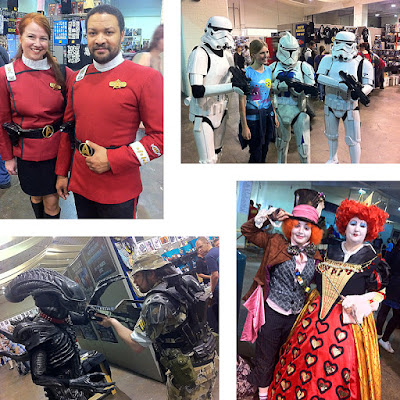 I got swept up with the event and booked myself three things for the day.

Arthur Darvill photocall
Booking on the day meant I was 353rd in the queue, but it wasn't too badly run, with marshals to make sure we were in the right side of the queue for the right numbers. 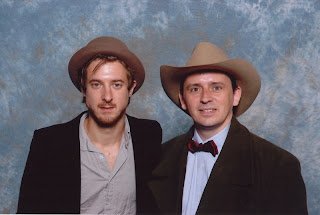 Arthur was scruffily dressed as usual, with a grey bowler hat and beard growth.

The photographer was the same as at Time Quest last year, and he had the same banter and manner as I remembered. It wasn't too long before I was in - hand shake / photo - and out. 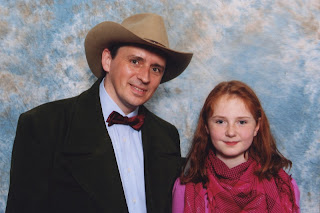 I also figured she look like her screen part now, but may not in a years time, whereas the rest of the cast will.

Sadly fewer convention goers were interested in her (which is a great shame) so I was only 60 in the queue despite buying the ticket only an hour before. 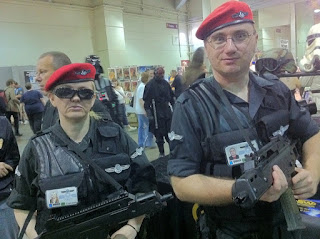 My thinking was bourn out as the first thing that strikes you is - hasn't she grown?!
It makes sense now that all her scenes in The God Complex were sitting down!!!

She came across slightly shy and unsure of what was going on around her. I gather it was her first event so I guess she was real nervous.
Bless her. 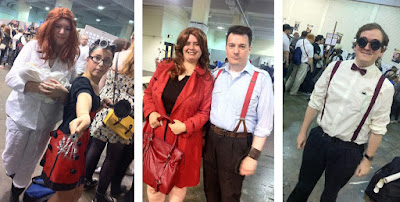 Doctor Who talk
I booked for this principally cos it was a SIT DOWN event and I could finally truly rest my feet!


The panel was formed of Nina Toussaint-White, who played Mels in Let’s Kill Hitler; Arthur Darvill; and Caitlin Blackwood.


Apparently Karen sang at LFCC, but Arthur declined repeatedly, only relenting if we ALL sang happy birthday to a member if the audience.I felt a bit annoyed later when he let on he sings in a band! Karen to my knowledge has no singing background.

Caitlin was the dark horse of the lineup - said little - but every word was a gem.
Asked if she’d sing, she said ‘No. I’m not weird like my cousin!’

Arthur asked if Doctor Who had been her first acting job. ‘Yes!’ did she now have an agent? ‘Yes!’ was she going to do more acting? ‘Yes!’ in Hollywood? ‘Yes!’ Was she gonna be as big as her cousin? ‘Yes - bigger!!’

Despite this I did get a bit bored after the third or fourth time someone fished for the content of the season finale - questions a moderator would at most only ask once just to have said they tried.

I slipped quietly away - my feet suitably rested.

It was now late afternoon and I thought time to collect my photocall pictures. Once I had these I said farewell to my friends and headed home.

I did miss the group cosplay photo, which was insanely planned for after 5pm - only a couple of hours before The Wedding Of River Song was screened - and I wasn’t missing that for anyone ……..
Posted by Steven Ricks Tailoring at 23:00