A little while ago I had a tip-off from one of my readers.
He sent me a link to a website called tobi.com selling designer clothing, including a range of Paul Smith garments.

What he had spotted was the Paul Smith PS shirt as worn by Matt Smith – but not a version that had been seen so far (see below). 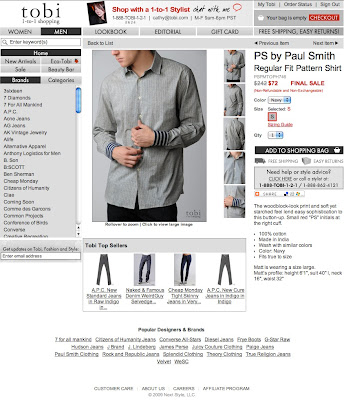 The only colourway available was the blue, with no sign of a burgundy option. When I looked at the site there was a S and a L option available with a drop down to chose how many, though only 1 was given.

I choose the L and made a purchase. When I returned to the page, the L option had gone, so I guess I grabbed the last one!
Within 24 hours I received an email saying it had been dispatched, and within the week it arrived by UPS courier (with an import duty charge, darn!) 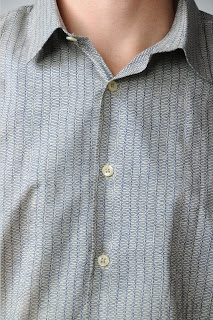 This new look Paul Smith PS shirt has some design points to differentiate it from the previous version.


For me though, the major difference to this shirt is the fitting. 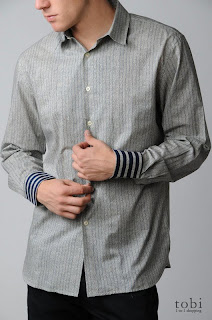 When I ordered my existing shirt I have, sourced from John-Anthony.com, I chose a Large. They called me to let me know it was out of stock, so I settled on an XL instead. To my surprise it was too small for me, and I later had to acquired an XXL from eBay, which is a passable fit. Since letting out the back, it is much more comfortable.
This new shirt, by comparison, is straight off a good fit, and is just a Large. The whole cut is better.

This new shirt, however, despite being just a Large, is a very good fit, with a decent amount of room in it. This bares up the Fits true to size comment on the website listing. 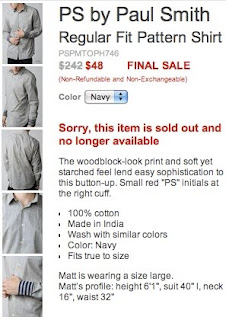 Lastly, I was most amused to notice the footnote in the listing that states the model, Matt, is wearing a size large.

I wonder if they mean Matt Smith?
Posted by Steven Ricks Tailoring at 22:13